When Gayle Dwije's firstborn daughter was barely a year old, a group of strangers smashed the windows of her family's home in Bali and burst inside. Gayle did not recognize the men, but she suspected immediately that her husband, Wayan, who was born into a Balinese family as the son of a Hindu high priest, might be murdered because of his Christian faith.

Gayle grabbed their daughter and fled frantically into the backyard. The family climbed a seven-foot ladder to the neighbor's house and called the police. By the time officers came, it was too late to catch the perpetrators. The men had disappeared and left behind broken glass, a home in disarray, and a shattered sense of security.

"The police couldn't guarantee our safety," said Gayle, who now copastors the Christian City Church (C3 Bali) with her husband in Denpasar, Bali's capital. The family decided to move to another part of town.

Wayan, a native Balinese who became a Christian in 1994, is no stranger to death threats, including one from his own uncle. But this attack was the closest anyone had come to killing him. In the eyes of Wayan's extended family and community, his crime was that he abandoned his Hindu beliefs became a Christian. Yet what the Dwijes found after the attack was a deeper understanding of the Holy Spirit.

Island of the Gods

Bali, one of Indonesia's 17,508 islands, is home to Indonesia's Hindu minority. The island became a refuge in the 16th century for Javanese Hindus fleeing the spread of Islam in Indonesia.

The province of Bali is 93 percent Hindu, while Indonesia as a whole is 85 percent Muslim. One doesn't have to walk into one of the 20,000 Hindu temples or shrines to realize that Hinduism ... 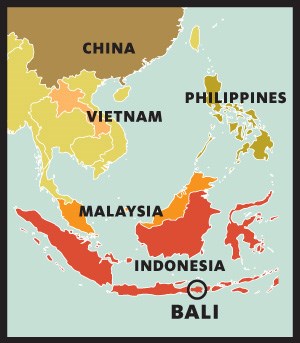