The movie about Wikileaks is a mess, and a giant missed opportunity.
Jackson Cuidon|October 18, 2013
Image: Touchstone Pictures
Our Rating

When good movies have flaws, they disguise them well enough that you don't think about them till the next day, or next viewing, or tenth viewing, or at very least the car-ride home. But The Fifth Estate barrels like a juggernaut through every single suspension cable of belief, and the movie collapses under its own weight once you realize that all of this is pretty silly, isn't it, and leave the theater pretty sure that wasn't a good movie at all.

It's never so egregious that you tune out entirely, and is not apathetic in the way Grown-Ups 2 is: a movie that is not intelligent or "good" in any sense, and doesn't care. No, The Fifth Estate tries to do a lot, and be a lot, and it fails on almost every front.

Maybe "silly" is a strange word to use to describe a movie that is being hotly debated by both pro- and anti-Assange camps, but it's totally appropriate. Daniel (Daniel Brühl) is roped into an organization started by Julian Assange (Benedict Cumberbatch), WikiLeaks—a website devoted to allowing whistleblowers to reveal confidential information without fear of reprise or backlash.

As they work together, Daniel learns more about Assange's past, motivations, and desires, and falls out of love and favor with the Aussie. Things come to a head when WikiLeaks gets its hands on 250,000 leaked U.S. diplomatic cables and Army reports from the Pentagon. Assange feels compelled to release the documents as-is, claiming that "editing reveals bias." Daniel, in contrast, thinks that their primary obligation is to redact names so as to protect the people who may be hurt as a result of their disclosure.

The Fifth Estate can't decide what kind of movie it wants ... 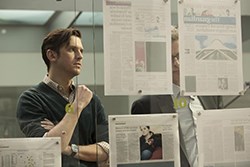