Last month, a short film won praise from animation fans and film critics. The big surprise? It was a commercial for Chipotle restaurants.

In it, a scarecrow discovers cruel and unusual practices happening behind closed doors at a fast-food factory. Machines pump livestock full of chemicals. Sinister, robotic crows spray crops with pesticides. And consumers line up to swallow the toxic results, oblivious—perhaps willfully oblivious—to their part in an ugly enterprise.

Chipotle's brilliant pitch (whether or not it accurately represents their product) appeals to an increasingly popular appetite. Even though consumer culture gives us more options all the time, at greater and greater convenience, we're hungrier than ever for something real.

This also applies to moviegoing.

Talking with other film fans, I find that by September, many of us are feeling a little regretful, a little sick. We've spent the summer consuming big-budget, committee-designed, factory-made features. They're like microwaveable burritos stuffed full of shouting, chases, gunfire, showdowns, explosions, and end-of-the-world scenarios.

So we start looking forward to the opposite—a parade of pompous, overly serious, "important" features known as Oscar Bait. And here they come: films that shove hard ... 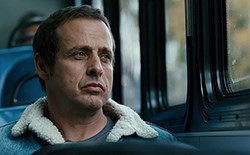 Nothing Better Than The Real Thing: 'Museum Hours' ...