How sensual delights prepare us for the eternal feast.
Carolyn ArendsAugust 29, 2013
Image: nsilcock / iStock
This article is from the September 2013 issue. Subscribers can read all of CT's digital archives.

There is a Tex-Mex restaurant in Houston I have visited on three occasions. Each meal has begun with chile con queso. The cheese at this particular restaurant is the most delicious food I have ever tasted.

With every bite, I have been overcome with gratitude to God for creating taste buds, cows, and human ingenuity. And that gratitude has led to praise.

Some folks understand this. Some think I'm kidding. And others are skeptical that such a carnal thing as a Tex-Mex appetizer could provoke genuine worship.

We Christians have a long history of mixed and sometimes openly hostile attitudes toward sensual pleasure. Saint Augustine is the fourth-century poster boy for our dilemma, struggling in Book X of his Confessions to rein in each of his five senses. He attempts, for example, to "take food at mealtimes as though it were medicine" and to "fight against the pleasure in order not to be captivated by it."

Augustine is ever-vigilant that pleasure in created things never replace our desire for the Creator. His caution is well taken. But lately I've been discovering an emphatically propleasure voice in the writings of another Christian guide.

C. S. Lewis is known, of course, as a literary scholar, novelist, and apologist. He is also, consistently, a curator of pleasure. Where there is beauty to be received, music to be heard, laughter to be welcomed, and (especially) food to be eaten, Lewis attends, celebrates, scrutinizes, describes, and partakes.

In Letters to Malcolm: Chiefly on Prayer, Lewis argues that the pleasures derived from forest moss and sunlight, bird song, morning air, and the comfort of soft slippers are "shafts of [God's] glory as it strikes our sensibility." ...

Singer/songwriter and author Carolyn Arends has written and released 9 albums and penned 2 books, including Wrestling With Angels (Harvest House/Conversantlife.com). A list of her blogs can be found at CarolynArends.com. Her bimonthly "Wrestling With Angels" column has appeared in Christianity Today since 2008.
Previous Wrestling with Angels Columns: 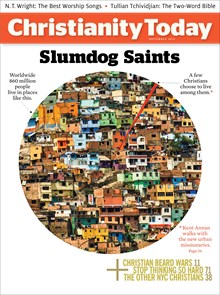