Last week I explored whether our art is up to dealing with the challenges of our times. I suggested that one of the difficulties facing artists is that there's simply more stuff to watch, and so even a great work simply gets seen by fewer people—which means we have fewer common texts to talk about, and fewer works that can move the needle substantially on our national conversations. 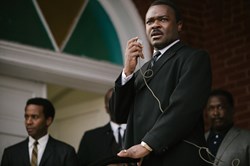 Having said all that, I'm going to do something I've only done once before, and also say this: you, Christianity Today reader, need to go see Selma.

See it while it's in the theater (Christmas Day in some markets and January 9 in the rest), and bring some friends or family members. It is a very, very good movie, beautifully shot by Bradford Young (Ain't Them Bodies Saints, A Most Violent Year) and deftly, almost astonishingly well-directed by relative newcomer Ava DuVernay. Its cast is terrific— Oprah Winfrey, Lorraine Toussaint, Common, Wendell Pierce, Keith Stanfield, Colman Domingo, André Holland, and many more, plus Tom Wilkinson as Lyndon B. Johnson and Tim Roth as George Wallace. Carmen Ejogo is steady and heartbreaking as Coretta Scott King, and most importantly, David Oyelowo plays Dr. King himself.

Or is he most important? That's one question the film subtly explores—Oyelowo is marvelous, no doubt, and Young places him dead center in the frame over and over, thereby conveying the weight of the movement depending on him. The film opens with King receiving the Nobel Prize and uncovers his great strength as both an unmoveable force uninterested in what's convenient, and as a savvy strategizer who understands what must be done in a mediated age to force power to listen to truth.

These marches took place merely four years after the 1960 Kennedy-Nixon debates, to which many historians point as the moment when our presidential politics became defined by the television optics. King is very aware of this. He knows that while President Johnson can implore him in the privacy of the Oval Office to set aside the “problem” for political expediency's sake—the “problem” is that blacks were being functionally and systematically denied their right to vote by the whites in power—he can't ignore it if it's on the front page of the morning newspaper each morning and on the nightly news each evening.

And yet, DuVernay staunchly avoids lionizing King. He is a hero: that is clear. But what makes him a hero is his perseverance and his decision to set aside both what he wants—a small church in a college town—and the power that might rightly be his, as a Nobel Laureate and a man who can call the President when he likes, in order to work alongside those who have no power.

But King is just a man. He gets tired out. He wonders if they're really doing any good at all. He has failed morally, and it is his fault. Friends must remind him of his faith—not generically, but specifically, in long passages quoted from Scripture. He cries and worries. He calls Mahalia Jackson on the phone and begs her to sing so he can “hear the voice of God” and regain courage.

Most importantly, he isn't portrayed as the Great Man Who Changed the World; he's the one in charge of men and women, the one who has the burden of power and visibility. The men and women around him are full to the brim with clarity, certainty, and courage. They are all vital to making the movement go forward, even when they split and splinter and argue over tactics. King has conviction, but they have it too, sometimes more than him. 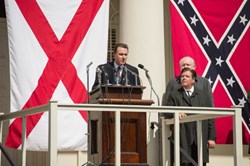 This choice, to humanize King (if one can say such a thing about a real person who died 46 years ago) while showing the burden of his power, completely transforms what could have been a feel-good movie about a great leader whom we commemorate with a federal holiday—and, therefore, a conscience-assuager extraordinaire—into something different, something both more empathetic and watchable and something much more grave.

Had this film come out last year, I would have said something like “of course, we know how it ends, and how he succeeded”—and he did, in important ways. But 2014 has brought many of the issues of racism, injustice, poverty, and the ugly human heart back into the national consciousness. It has made it difficult and foolish for those who care about compassion, unchanging truth, and justice to deny that the broken institutions which existed in 1964 have not gone away, and it's made it uncomfortably obvious how little has changed in fifty years.

Selma was in pre-production before this year's events. And the King estate did not grant permission to DuVernay to use the text of his iconic speeches in the film. But this is a disguised blessing, as the speeches he does deliver in the film are almost terrifyingly prophetic. At times, it's hard not to believe they were dubbed in last week, or today.

Somehow, in all of this, Selma also manages to be an enjoyably good viewing experience. It is not preachy, even though there is lot of preaching. Its story is compelling, almost nail-biting, even though we really do know how it ends. Its narrative structure is especially carefully crafted, smoothly moving between scenes, using sound to layer in action so as to direct you without overloading your senses, and laying on top of key scenes typed notes from FBI files, which—near the end of King's life—attempted to discredit him. It is almost unbelievable, except it's a matter of public record. 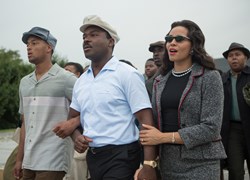 Can I tell you something? I don't cry at movies, ever. But from the moment of the first, shocking blast that sets the whole movie in motion, I was holding back tears. Selma evokes more than it tells, helps you understand without telling you what to think, makes you see what systemic evil means in a new way.

It also holds you responsible, at a historical distance—or rather, it holds responsible those who see evil at home and do nothing, especially those who aren't directly affected. The black protestors were soon joined in their march by white clergy from all around the country (about one-third of the crowd), who heard the call from King and responded to help, acting on both their belief in God and their knowledge, like King, that their own positions lended something to the movement that could help. The film's view of racism is that it is pure wickedness, and a wickedness that is baked into our hearts and our systems, but that individual people who love God and their fellow man—no matter the color of their skin—are called to act in ways that don't bolster their own power when they see injustice, and are heroic when they do so.

In other words, this is the most anti-political message you can imagine: if politics is about trying to gain power for yourself, Selma says that caring about justice means taking the power you have—celebrity, influence, networks, resources—and spending it on behalf of the powerless. (There's a reason that God continually orders his people in both the Old and New Testament to care for widows, orphans, elderly, and immigrants.)

I don't need to tell you that this important, but it struck me as I sat and watched that it's important to document this (shameful) period in American history in a way that audiences can watch and be moved. Here is a stunning fact: as far as I can tell, there has never been a feature narrative film* about Dr. Martin Luther King, Jr., despite the fact that he is one of very few individuals in American history who is celebrated in a federal holiday. 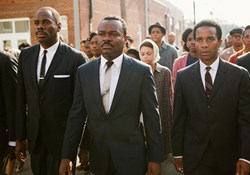 Making a film like Selma—and, I think, watching it—is an act of confession. Americans' national rhetoric, for centuries, has focused on leaving the past in the past and moving forward into the future. As a result, we have a short memory for things that happened just decades ago. (I brought my family to the film, including my mother, and afterwards everyone admitted they knew almost nothing about the events of the film.)

It's easy to remember in the abstract that the Civil Rights Movement happened fifty years ago in the United States, but it's also a bit easy to gloss over the nastier bits of it, and to remember what it was about. Sometimes we need to remember and recount our past to one another so we can experience sorrow for what people—what we—are capable of, and so we can learn from it today. 2014 is a year when we need to remember the past, a past that's so recent that many still remember it. If everything was different now, maybe things would be different. But right now, we desperately need Selma.

The film is rated PG-13, but I think you could bring a younger child to the film, provided they can follow the history and won't be too traumatized by the violence—because there is violence. It is brutal, but not graphic, which is to say that you feel it in your bones without having the film hammer the point home visually, but history is clear that many peaceful and nonviolent protestors were beaten by both police and bystanding whites. The victims include old men and women. One young black man is shot and dies. There is a smattering of bad language, not gratuitous, including a couple of f-bombs and a handful of racial slurs that you can easily guess. King's (well-known) adulterous liaisons are treated in one scene, in which you hear a couple seconds of a taped recording of what is obviously a sexual encounter; it's all discussed a bit obliquely between the Kings, and so it's heavy and serious but not at all sensationalized. People die. People are plain old evil, especially George Wallace, and that's hard to watch. [SPOILER FOR THE HISTORICALLY UNAWARE] The most gut-wrenching part is the 1963 church bombing, which absolutely jars and startles you the way it's meant to but which, again, you mostly feel.

* Which is to say, a non-documentary film meant to be seen in theaters. There was a made-for-TV movie in 2001 starring Jeffrey Wright, and there have been documentaries, but Selma is the first of its kind.

Alissa Wilkinson is Christianity Today's chief film critic and assistant professor of English and humanities at The King's College in New York City. She writes the “Watch This Way” blog and tweets @alissamarie.