The undead can teach us a lot about ourselves, says a writer from SyFy’s new 'Z Nation.'
Mark Moring|September 12, 2014
Image: SyFy
A zombie attacks in SyFy's "Z Nation."

In 2008, writer/filmmaker Dan Merchant got a lot of people talking about the human condition, moral dilemmas, and deeper questions about meaning and purpose.

His thought-provoking documentary, Lord Save Us From Your Followers (our review), was part social commentary, part cultural observation, part psychological exploration, and part theological examination. If you haven’t seen it, it’s well worth it.

Today, Merchant is exploring pretty much the same types of questions, albeit from a slightly different perspective.

Merchant is one of the writers and producers behind Z Nation, a new series premiering tonight on SyFy (9/8c). It’s the latest attempt to feed America’s voracious appetite for all things zombie, with AMC’s hugely successful The Walking Dead as Exhibit A.

But while AMC’s hit is largely serious drama, all dark and depressing, Z Nation brings a bit of fun—and even some campy humor. (This is SyFy, after all, and Z Nation is produced by the same company that made the Sharknado movies. So, that.)

And yet Z Nation takes itself seriously enough to explore all of the above questions, and it’s surprisingly rich in spiritual undertones. The pilot episode alone features:

Merchant says the show’s writing team includes “an atheist, and agnostic, a Catholic, an ex-Catholic, ... 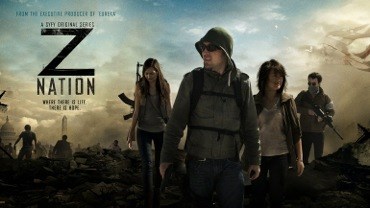