Good, innocent fun with a bunch of hilarious and fluffy sheep made by the creators of 'Wallace and Gromit.'
Jessica Gibson|August 6, 2015
Image: Lionsgate
'Shaun the Sheep'
Our Rating

I’m strangely relieved to say this: I don’t have a ton I want to write about Shaun the Sheep Movie. Family movies this year have felt either really complicated and in need of deep exploration (not a bad thing, but there’s a lot of ground to cover with a film like Inside Out), or they’re dull at best and deplorable at worst (Minions, Pixels).

But Shaun and Co. are exactly as advertised: fluffy, bumbling, adorable, and loyal to the end. The movie employs simple storytelling and uncomplicated morality that can engage young filmgoers, but has enough visual interest, gentle humor, and pop culture gags to at least mildly entertain adult chaperones. (To which group I will warn that my biggest complaint against the film is how hard it is to get the theme song out of your head. It may not be suitable for overenthusiastic toddlers with a penchant for repetitive choruses.)

Shaun is one of about half a dozen sheep living on a small farm run by a weary farmer (voiced by John Sparkes) and a dedicated sheepdog, Bitzer (also voiced by John Sparkes). The farm operates on a monotonous daily schedule—a sad change, we learn via montage, from the farm’s relaxed, happy early life when Shaun and Bitzer were young playmates.

Shaun is fed up with how boring their strict schedule is and convinces the rest of the flock through bleats, facial expressions, and complicated chalk drawings that they deserve a day off.

In proper Shaun the Sheep fashion (the flock’s TV show has had Shaun getting them into and out of all kinds of trouble since 2007), everything that can go wrong, does. The farmer ends up asleep in a camper van careening into The Big City as Bitzer races after him. The camper crashes and ... 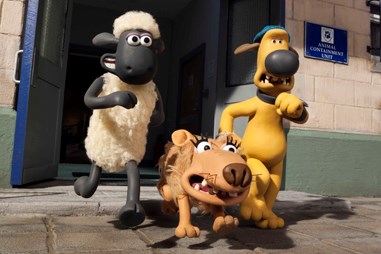