These three words pretty much guarantee I’ll buy a ticket to the cineplex, every time:

The studio has a knack for finding some of the most inspirational—and often unlikely—sports stories out there, most of them with a theme of overcoming adversity.

If you wrote these stories from scratch, as fiction, they’d all seem hackneyed, corny, too good to be true. But the fact that they are true is what makes them so entertaining.

I wouldn’t be such a sucker for these movies if they weren’t the real deal. But there are few things better than a person or a team rising from the ashes, beating the odds, and coming out on top. Even all the clichés in that last sentence are forgivable in the context of real people in the real world. Makes it easy to embrace the good vibes.

Disney has found another such story with McFarland, USA, a true tall tale that’s so improbable you’d have to see it to believe it.

The main problem? They kept getting the villain all wrong.

At a tiny high school in the mostly Hispanic southern California town of McFarland, California, Coach Jim White (played by Kevin Costner) starts a cross country program from scratch. He takes a handful of boys—all from impoverished families of migrant workers from nearby Mexico—and, in a matter of months, puts together a cross country team that wins the 1987 state championship. And then they go on to win a string of state titles, becoming a dynasty in the sport.

The movie repeatedly portrays the opposing teams and coaches as the villains. Everyone they competed against—every runner, every coach—was portrayed as snotty and haughty at the least, cruel and racist at the most.

Seriously? Not a decent person among the thousands of cross-country runners in all of California in 1987? Come on.

Here’s the thing: The true villain was right there all along, in McFarland. The villain was poverty and hopelessness and the punishing life of a migrant worker, of 12-hour days in the fields, beginning as young as 8 years old, of little chance of a better life, ever. It had continued for ages, and these teenage boys felt like there was no way out.

McFarland, USA does a nice job portraying this community, and we get a good feel for their triumphs (which are few) and their tragedies (which are many). The difficulties of a family of migrant workers, simply looking for a way to make a living, are unimaginable. But this movie gives the viewer a good look at such a life. And it’s really hard. 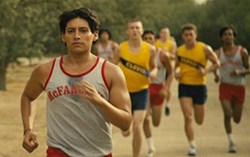 That’s the real villain here. Escaping the clutches of that villain and finding a better life.

In McFarland, USA—the movie and the real story—many of these young men and their families do find a way to vanquish the villain. They escape the grueling cycle of poverty that had plagued their families for generations.

Running made them feel confident. They started taking academics more seriously. They began winning college scholarships. They got good jobs. They earned good money. Like the swift runners they were, they pursued, and caught, the American Dream.

And all that happened when Jim White came along and convinced them they could literally run their way out. Literally, the White guy to the rescue. (The movie has some fun with this point; his runners jokingly call him “Blanco,” and the humor and irony aren’t lost on Coach White.)

A 1997 Los Angeles Times article about the school’s dynasty notes that though McFarland is surrounded some of America’s richest farms, it is also one of the nation’s poorest cities. Today, 51 percent of the town lives below the poverty line.

“Until a decade or so ago,” the Times story reads, “when Coach White hung his first championship banner, none of this would have been possible. The men of dirt-poor Huanusco [Mexico] would arrive in McFarland in April and leave for Mexico in October, after the last raisin had been turned. There was no time for the young ones to attend school most days, much less become champion runners. Before they knew it, they were gone.

“Now a historic shift is remaking McFarland. Many migrants have stopped migrating. The reasons are almost entirely economic. Over the last 10 years, despite numbing poverty, they have patched together enough earnings to buy houses, bring family from Mexico and carve out full-time lives here . . .

“It has brought home the hope that the grip of the fields might one day be broken.”

There’s your villain, right there. The grip of the fields. No sneering foes needed. No racist snark necessary. 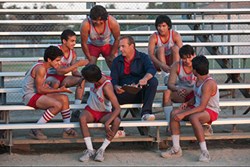 Caro not only knows how to make a good movie, she knows how to make a good movie about underdogs. Whale Rider and North Country were both about females asserting themselves in cultural settings where males are dominant, even ruthless. Both films managed to make a Cultural-Political Statement—that women can rise above age-old practices to become leaders (Whale Rider) or break the chains of sexual harassment (North Country)—without feeling like they were “message movies” with an agenda.

I wonder if Caro was trying to make another such Statement—albeit a subtle one—in McFarland, USA. The plight of undocumented immigrants is a hot-button issue. Could it be that all those sneers and racist remarks from McFarland’s opponents really represented white Republicans who seem to favor mass deportation?

At any rate, you’ll embrace these kids and wish them the best. You’ll root for these underdogs, all right, but hopefully for deeper reasons than just winning races and leaving those jerk opponents in their dust.

You’ll cheer for these kids to rise above, to break the cycle of poverty, to believe in themselves, to attain their own version of the American Dream. That’s the real finish line here.

McFarland, USA is rated PG for thematic material, some violence, and language. The “thematic material” mostly concerns an Anglo family trying to find its way in a mostly Latino community. There is very little violence or language. It’s a family-friendly film that’s fine for anyone ages 10 and up. There is good discussion fodder about the values of family, of hard work, and of what it means to be an immigrant trying to find your way in a foreign land.

Mark Moring is a CT Editor at Large and a writer at Grizzard Communications in Atlanta.