Pontiff tells crowd of 11,000 on White House lawn that God ‘has not forsaken us.’
Christine A. Scheller in Washington, D.C.|September 23, 2015
Image: Christine Scheller

An enthusiastic crowd of 11,000 ticketed guests gathered on the South Lawn of the White House this morning as President Obama officially welcomed Pope Francis to the United States.

Among the overwhelmingly Catholic audience there to greet him on his first US visit was a smattering of evangelical leaders.

Like 45% of Americans, many evangelicals have ties to Catholicism—a spouse, a parent, perhaps even a grandparent who was once Catholic and left the fold for a Protestant version of Christianity.

Beyond familial ties, what had these evangelicals and other non-Catholics waiting in the wee hours of the morning was a chance to catch a glimpse of this historic meeting between America’s first African American president and the Roman Catholic Church’s first Latin American pope. They were also likely drawn by the way in which Pope Francis has embodied the gospel message, said Melissa Rogers, executive director of the White House Office of Faith-based and Neighborhood Partnerships.

Rogers, who spoke with CT during a pre-event press call last Thursday, said Pope Francis has brought Jesus’ teaching to life through prison visits, foot washings, and outreach to the homeless.

“He has made efforts repeatedly to not just talk about this message of Jesus and the love of Christ for others, including the least of these, but also embodied that message with his deeds,” said Rogers. “Religions all have this value of reaching ... 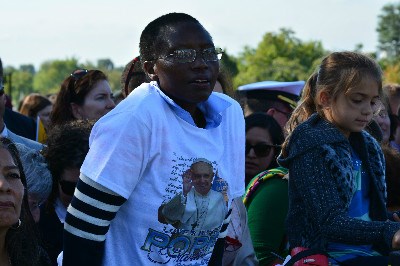