In an unguarded moment late in The Intern, the main character protests, “How in one generation have men gone from guys like Jack Nicholson and Harrison Ford to . . . ?” and vaguely gestures at a group of frumpily dressed 20-something men.

There’s no good answer to this lament, or at least, not one that would go over well with the 20-something generation in question. But the fact remains that men and women today look and behave very differently than their counterparts just a generation ago, and no one seems sure about whether or not this is a good thing.

The Intern sets up this dilemma only to scrap it completely. The film gently, without judgment, and with lots of humor dissects gender roles and how they’ve changed in the past 50 years, presenting cultural contrasts for contemporary manhood and womanhood that both reveal their failures and affirm their successes.

Ben Whittaker (Robert De Niro) is a 70-year-old retiree with too much time on his hands. He’s tried keeping busy with a hilariously long list of random activities, but none provided him with the same sense of purpose that a regular job once did. He has just enough charming kookiness to leap at a nontraditional opportunity: an internship for senior citizens at an online fashion store, About The Fit. As he says in his filmed cover letter, “I’ve still got music in me.”

After a series of interviews with increasingly youthful employees, Ben gets the job and is assigned to the company founder and C.E.O., Jules Ostin (Anne Hathaway). Jules is personable and well-liked in the company, but she obsessively over-works herself to keep things running exactly how she wants them. The strain is beginning to show: the company ... 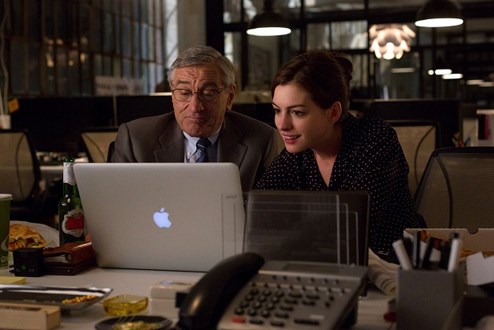