The star of the History Channel's "Roots" talks about his faith, his strange route toward his iconic role, and what he learned from playing Kunta Kinte.
Alissa Wilkinson|May 24, 2016
Image: A&E Networks
Malachi Kirby in 'Roots' 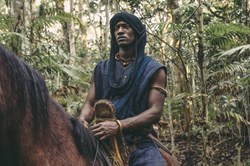 Though he’d had roles in EastEnders and Doctor Who, landing the role of Kunta Kinte in the History Channel’s new production of Roots was the last thing Malachi Kirby expected. The twenty-six year old English actor was reportedly chosen by executive producer LeVar Burton—who played Kunta Kinte in 1970s production, a runaway hit in the United States—for the role.

But as Kirby tells the story, his casting is all God’s doing. And in taking on the physically and emotionally demanding role of a young man captured in Gambia and brought in chains to a plantation in Virginia a hundred years before the Emancipation Proclamation, Kirby learned more than he’d bargained for. The newly reimagined show covers the same ground as the 1977 series, but incorporates several decades of research done since the previous version aired. Along with Kirby, Forest Whitaker, Laurence Fishburne, Jonathan Rhys Meyers, Anna Paquin, and others star.

Kirby spoke to Christianity Today from London by phone about his botched first audition and what followed, and what he learned from playing the character.

The following transcript is Kirby’s words, slightly edited for clarity and length.

The Worst Audition—and the Best

Where do I begin? In January 2015, I had my first audition—January or February. I remember hearing about the audition and then thinking, why are they doing this again? Why are they making this project again? I was a bit scared of it, to be honest. Then I got an audition, and I spent most of the time worrying about what would happen if I got the part, rather than actually preparing for it.

I had the first audition, and it was easily one of the worst auditions of my life. Everything went wrong. I got there about half an hour late, sweating, and I'm not usually late for things. I learned my lines, but when I got in the room I didn't know anything. I'm trying to read off of the script and it's like I'm illiterate—I can't speak properly, everything's just fumbled. I'm supposed to do it in a West African accent and it was anything but that. I think it was Australian at one point, and I can't even do an Australian accent. It was just ridiculous, and I just basically kept apologizing to the casting director.

And then I left.

Five months later, they got back in touch. My agent calls me, and he says, "Oh, you must have done something good in there, because they want to see you again." I'm like, "Dude, you don't even know!" I'm thinking, oh, they must be really desperate.

So I go in again . . . And that actually was one of the most incredible auditions I've ever had. It felt like an out-of-body experience. I definitely felt like something else was happening in that room that I wasn't in control of. I felt everyone else feel it, too. I felt like a vessel.

Then something really strange happened. I was in my room, a few days after the audition, and I was praying. Whilst I was praying—it was actually a prayer of repentance at the time—God spoke to me, in a way that I have never heard his voice before. He told me that I've received this part, and he said to declare it in advance before it comes to pass, that he'd be glorified.

I went back-and-forth, thinking it's just my imagination, I'm not going crazy. I kept praying and it was clear as day. He told me to tell my agent. My agent's supposed to tell me I've got the part, and God said to tell him.

It was the weirdest conversation. But I did it. I told him. He's not Christian or anything, we hadn't really had that kind of conversation. And he's like, “Um, okay? That's cool.” I just kind of left it there.

A Test of Faith 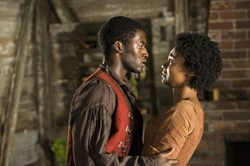 I was in church the next day. It came to me again to share it with the church, in advance, that God would be glorified, so I shared it. They prayed for me . . . I didn't think I was going to keep waiting long. I've told everyone now, so I've done my part.

Then the fourth week comes, and my agent calls. He says, "I've got some good news." They want to give me a screen test, like another audition. He says it will either be in South Africa, in America, or London. They're waiting to find out—this was on a Monday.

The screen test was incredible. I thought it was going to be a fifteen-minute audition, and we end up spending the whole day there . . . I had to remember what God told me, which is that it was already mine. It wasn't like I was claiming it—it was like God was giving me something I wasn't even ready to have.

I go back to London the next day and then my agent calls me . . . and he tells me—it wasn't even with excitement, it was just like, "It's come to pass. What you said has come to pass." We spent the next two hours just speaking about God.

That was the beginning of an incredible journey that is still continuing. God showed me this in advance, I believe, so that I could declare it in advance so that he'd be glorified. It's what I've been doing since: just glorifying him.

. . . I remember sitting at the first read-through and thinking, ﻿All these actors are amazing﻿. It isn't because of their names; it was because they fit the part so well.

I just remember looking in the mirror, thinking, Why am I here? I went to God and prayed about it. I was shown that it's not about me. I'm just a vessel. I need to make myself available and let him do what he needs to do. So that's what I did: every day, literally, I got down in prayer before every scene that we shot, and asked God to use me. What ended up happening was something that was beyond anything that I thought I could ever do by myself. Something else was going on . . .

I've committed this whole thing into his hands. I've asked him to have his way.

So many people who were enslaved didn't even make it off of the boat, let alone make it onto the plantation, let alone live to the age of forty, have kids, and get married. He was rebelling so much. It wasn't like he was just going along with it—he was running away. He had his foot chopped off.

How did he actually survive this? How did he not only survive but have his ﻿identity﻿ survive? They're trying to change him into someone else, and yet he holds on to who he is, somehow . . . 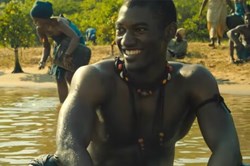 “I Couldn’t Get Their Cries Out of My Head”

I wasn't sure what it was that he actually meant till we started filming. What happened was, we're doing the whipping—he's not really whipping me (because that's illegal!)—but I have to respond to the sound of his whip.

And I'm praying to God, and asking him to help me portray this pain. I want to do it for real.

By the end of the scene, what I also found is when [Kunta Kinte] says, "Toby," that's not him submitting; that's him surviving. That's him acknowledging, ﻿If I carry on, resisting like this, I'm going to die. But if I give him what he wants right now, I'm going to live—and I'm going to live to fight another day﻿. So I found that understanding in that scene: that he doesn't give up at that point.

But what also happened was something that I hadn't prepared for. I had prepared for this idea of feeling some kind of pain, because I needed to show it. But the ﻿amount ﻿of pain I had not prepared for.

And I'm not ashamed to say, it broke me down. I broke down not just in tears, but it was like it was torment. I found myself bawling and I couldn't get up, because I couldn't get these cries out of my head.

The History Channel’s remake of Roots premieres on Memorial Day, Monday, May 30 at 9pm ET. Its eight hours will air over four nights that week.

Alissa Wilkinson is Christianity Today’s critic at large and an assistant professor of English and humanities at The King’s College in New York City. She is co-author, with Robert Joustra, of How to Survive the Apocalypse: Zombies, Cylons, Faith, and Politics at the End of the World (Eerdmans). She tweets @alissamarie.