Elias is waiting for a German official to evaluate his Christianity.

He converted from Islam in Iran secretly. He was afraid because he knew that other converts had been arrested and beaten, some even killed. He had also heard of converts finding asylum in Germany. He dreamed of going there and being baptized in public. He could worship in the open, start a new life, and join a church, free from the fear of reprisals for his newfound faith.

And so he fled to Germany. When he got there, he applied for asylum. Now, Elias (a pseudonym) waits for the Federal Office for Migration and Refugees (BAMF) to rule on his case. He is far from alone.

Between 20,000 and 40,000 refugees are seeking asylum in Germany on the grounds of religious persecution because of their conversion to Christianity, according to a 2019 Open Doors report. Amid sharp national debates about anti-refugee sentiment, religious literacy, and religious freedom, a number of evangelical leaders have called for changes to the process of officially evaluating refugee conversion.

Currently, the BAMF judges the sincerity of conversion and the severity of potential threats to asylum seekers’ lives. There is, however, a lack of explicit standards, clear criteria, or legal precedent for these examinations, and the BAMF grants asylum at significantly different rates in different parts of the country.

“It’s like a lottery,” said Gottfried Martens, pastor of a Lutheran church associated with the Missouri Synod in the Steglitz neighborhood of Berlin. Martens cares for more than 1,000 baptized Iranian, Afghan, and Pakistani Christians in his church and is currently instructing hundreds more in preparation for baptism. 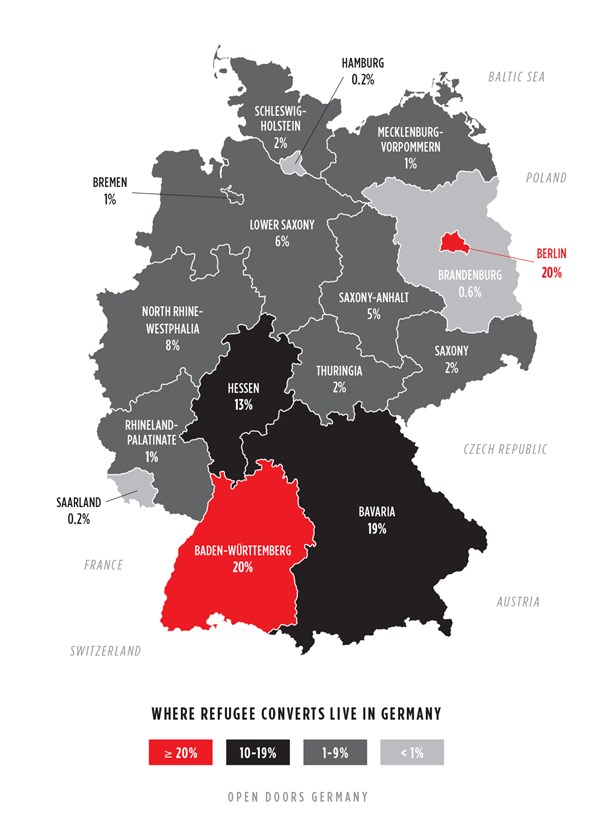 Martens wants the process to be more consistent. He joins the German Evangelical Alliance and Open Doors in calling for a standardization of the examination procedure and more cooperation between the government and religious authorities. The Christian groups are part of a diverse coalition calling for change, including conservative and liberal politicians, the Baha’i community, the International Society for Human Rights, the Konrad Adenauer Foundation, and Ahmadi Muslims (who have been persecuted in Pakistan).

Other countries have also had issues with converts seeking asylum. In the United Kingdom, there were multiple reports in 2016 of asylum seekers “being interrogated on ‘Bible trivia’ ” as part of the application process. More recently, the European Court of Justice condemned Hungary’s treatment of asylum seekers. Some migrants have been kept in prisonlike conditions in camps on the border since they were denied religious or political refugee status in 2018. Hungary now has to reconsider those migrants’ applications for asylum.

“The issue is of great importance to Germany,” said Volker Kauder, a leader of the Christian Democratic Union and an evangelical who was once known as Chancellor Angela Merkel’s right-hand man. “Freedom of religion is the litmus test for human rights.”

Some evangelicals want pastors to have more of a say in assessing conversions. Markus Rode, head of Open Doors Germany, argues judges may not have the religious literacy necessary to evaluate spiritual transformation.

“The change of belief towards Jesus Christ is a spiritual process. And as such, it can only be assessed by people who have themselves accepted Jesus Christ in faith,” Rode said.

“People who often are not believers think they can judge the beliefs of someone else within half an hour,” he said. “It’s absolutely ridiculous.”

Skeptics say conversion can be an easy route to asylum. But Martens—who has hands-on experience with thousands of refugee converts—disagrees. The process is intimate and thorough. While he admits that there may be people who try to cheat the system, Martens puts every convert through an intensive examination before baptism.

“Thirty percent of them fail,” Martens said. “We don’t just baptize them and proclaim ‘Hallelujah!’ We really check them out.”

According to the BAMF, however, officials already recognize baptism as sufficient proof of conversion. Spokesman Christoph Dieter said the question is about “the seriousness of the commitment to the new faith” and the potential of “persecution because of a change of belief in the home country.”

Frequently, the BAMF comes to the conclusion that persecution is not a real concern. An Open Doors study found that about 25 percent of converts have their asylum applications rejected. Converts to charismatic churches were significantly more likely to be rejected, with 48 percent turned down.

Kauder, who has served in parliament since 1990, said BAMF officials are making the issue seem more complicated than it really is. “Once someone has renounced Islam, regardless of whether or not he authentically converted to Christianity, he can be prosecuted for apostasy,” he said. “When it comes to political persecution, those who persecute do not care about the authenticity of a conversion.”

Apostasy is a capital offense in Afghanistan, Brunei, Mauritania, Qatar, Saudi Arabia, Sudan, the United Arab Emirates, and Yemen. In a few other countries, including Iran and Jordan, it is not formally illegal to reject Islam, but religious laws can be used to prosecute people for apostasy.

There are only a handful of cases where apostasy resulted in a state-
sanctioned execution. But Mohammad Fadel, law professor at the University of Toronto, said formal legal systems are less important than “social law” in this matter. In many countries, punishments are meted out haphazardly.

Apostasy is considered a serious offense—legally or socially—because converts are understood to be “renouncing the bonds upholding the entire Muslim community,” Fadel said. Many Muslims also feel that Islam needs to be protected from Christianity, he explained, which is identified with colonial Europe and Western military power. Because of this, “if someone renounces Islam, life would be made unpleasant for that person in one way or another.”

“Whether these countries have formal laws against apostasy or not, vigilante justice is common,” Ispahani said. “It becomes very difficult to distinguish why the verbal or physical violence is being perpetrated. The mere allegation is enough to destroy a person’s life.”

This is Elias’s situation. And it’s what he plans to tell the BAMF when he goes before the government official.

“My family will not accept me anymore,” he said. “Not my friends, my country. No one.”

His only hope, he believes, is asylum in Germany.

But as Elias prepares for his interview, where he will be questioned about his religion, his conversion, and his decision to flee, he is afraid he won’t be trusted. Germany has seen widespread opposition to asylum seekers, growing anti-refugee sentiment, and fear that Muslims will ruin German culture.

“I am more afraid of my government back home, but this government makes me nervous, too,” Elias said. “I am an enemy at home, but I am also seen as an enemy here.”

He’s right to be concerned. A 2018 report from the SETA Foundation for Political, Economic, and Social Research found that increasingly, asylum seekers are seen as “economic ‘free riders’ and/or existential ‘threats,’ ” according to the report.

“They think they’re claiming Christianity just to get asylum here and then they will go back to being Muslim,” Martens said.

According to Open Doors, the situation is getting worse. Until July 2017, conversion was generally accepted as sufficient grounds for asylum. The rates varied by state, but about 75 percent of converts received asylum. Now, the rate has dropped to about 30 percent, both in places that have a lot of refugee converts, like Baden-Württemberg, and places that only have a few, like Bremen and Hamburg.

“More and more Christian converts are denied the authenticity of their change of belief,” Rode said, “and declared liars and fraudsters.”

Those rejected can appeal their claims, however. In the first half of 2019, German courts overturned about 40 percent of deportation orders, lending support to the chorus of religious and humanitarian voices calling for change. It is not clear, though, whether German evangelicals have the political clout to make it happen.

In the meantime, Elias waits.

“I have no idea how my situation will be decided,” he said. “But I trust in Jesus. In his kingdom, there is no question of my protection. He is with me always, to the very end.”

Ken Chitwood is a writer and scholar of global religion living in Germany.

Editor’s note: Have something to add? See something we missed? Share your feedback here.

You can now read or share this article in German, as part of 150+ CT Global translations.

You can also now follow CT (in English) on WhatsApp and Telegram.

[ This article is also available in Deutsch. ]