Since the holiness movement was the focus of my graduate studies, and since the current issue of Christian History & Biography is on this topic—Issue 82: Phoebe Palmer and the Holiness Movement—I can't resist introducing you to a woman who, I think you'll agree, was one of that movement's most fascinating figures.

We meet Amanda Smith briefly in this week's featured online article from Issue 82: "I received my commission from Him, brother," the story of women holiness leaders, written by my friend and fellow Duke graduate student Jennifer Woodruff Tait. But there's more to Smith's story.

Born a slave, Amanda Berry Smith was educated mainly at home and was employed for the early years of her life as a domestic worker. She endured two unhappy marriages but found "the joy of the Lord" in 1868 in a classic Wesleyan sanctification experience. Not content to sit still with her experience, she launched out the following year (her second husband and children had died by this time) as a traveling preacher to black churches in New York and New Jersey.

Though she found some success in AME and other African American churches, Smith soon came into her own as the darling of the white holiness camp-meeting circuit. White holiness believers heard God's authority and love clearly in her preaching and singing. 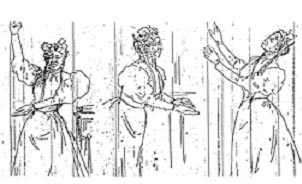 Smith's fervent, straightforward speaking and writing style jumps out at us from the pages of her 1893 Autobiography, where she relates—in the classic form of the holiness "testimony"—her search for sanctification. Pointedly, she tells how this search was impeded by an AME elder's failure to understand both the "entire" and the "immediate" nature of sanctification under Phoebe Palmer's "shorter way":

I had now begun to seek entire sanctification. I asked an elder what was meant by being "pure in heart." "Oh, child," he said, "that means you must come as near to it as you can." I went home, but oh, this hunger and thirst after righteousness was not satisfied. When I was convicted for holiness I was in a clearly justified state. I had no doubt about my acceptance with God. When I was converted it was conviction of guilt, now it was conviction of want. As the hart panteth after the water brook, so my soul panted after God, the living God. "That comes to me what I want," I said, "It's God!" The elder said, "You must come to it as near as you can. What is the use of fretting yourself? Do all you can. Visit the sick, sing, pray!"

But hunger went on, and when I read, "Rejoice when men persecute you," I felt that was not my experience; there was a feeling of retaliation. And when they spoke about me and blamed me, I wanted to justify myself instead of leaving it all with God. Then I read, "This is the will of God, even your sanctification." I went to the old deacon and asked, "What's the meaning of this?" "Oh," he said, "that's the blessing people get just before they die." Well, I didn't want to die; I wanted to live and work for God. …

Finally Smith realized that, as Palmer taught, the crucial prerequisite to entire sanctification was entire consecration. She had to "lay her all on the altar," Christ, and wait for him to "sanctify the gift." This she did, and soon enjoyed the joyous result. She later spoke of that crucial act of consecration:

You must make your consecration complete, and you must make it eternal. No experimenting by a temporary consecration will answer. It must be complete and eternal. I gave everything to God. All I had was my black self and my washtub and my washboard; but I gave all, and the Spirit came and sanctified my soul.

Stories like Smith's were repeated, with variations, countless times in the holiness movement. No form of lay expression was more important to holiness folk than the telling of one's conversion or sanctification (or, by extension, of any great thing God had done in one's life). This is not surprising, since holiness matriarch Phoebe Palmer insisted that it was not just good but essential to give testimony: if you didn't tell the story of your sanctification, you couldn't expect to keep it.

The spoken testimony therefore became the central feature of almost every holiness meeting—whether the parlor meeting, the camp meeting, or, as holiness denominations began forming in the last two decades of the 19th century, the church meeting. In these forums, testimonies were often abbreviated and rapid-fire. On paper—and what reams of paper were given over to these precious communications!—they could be greatly elaborated.

The longer form of testimony, the "experience," ranged far beyond the conversion or sanctification of the teller. In her autobiography, Amanda Berry Smith reported a sequence of events involving a New York stockbroker named Mr. Palmer (no relation to Phoebe Palmer), who was one of the many Christians to seek out Smith for her prayers and spiritual advice. The central point of this story is the same as that of most holiness testimonies—God is a father who gives good gifts to his children:

That night there was a Mr. Palmer there. He was a very nice man, and a very consistent Christian. When the meeting was over, these gentlemen went to put me on the Sixth Avenue cars. He said, as we walked along, talking, "Sister Smith, for years I have been seeking the blessing of heart purity, and your testimony tonight helped me. But why is it I do not seem to get out into the full light? The Lord has blessed me," he added, "and I have some means. I am a broker on Wall Street. But I have consecrated all to the Lord. And any time you need any help, you must just let me know."

"Well, sir," I said, "I never tell anybody but the Lord about my needs. He knows all, and I always tell Him to put it into the hearts of people to help me when I need it, and then I leave it."

Now, somehow, I felt that the Lord wanted that brother to give me some money, for I did not have quite enough to go to Kennebunk. So I said good night, and got on the car and on I went. But I prayed all the way, and after I got home, that the Lord would trouble that man's heart, for I felt that he was disobeying the Spirit, and that was one reason why he could not come out into the light of full salvation. You must not keep back the full price of loyal obedience to God, and yet expect Him to bless you. And yet how often do we find persons doing this very thing. Then they wonder why they do not get on. The Lord help someone who reads this to see the truth.

I felt somehow all the time that that man was the one that was to help me out. So next morning I got down and prayed again. And then I got up and began to get my things ready. I was doing some ironing. All at once I heard someone come running upstairs very quickly. When he got to the foot of the stairs he called out, "Sister Smith!"

"Yes," I said. Who should it be but this very brother.

"I had an errand uptown this morning," said he, "and I thought I would run in and see you."

But he did sit down a few minutes, and then he said, "I wanted to give you a little money."

"Amen," said I. "You might as well have done it last night. That's what the Lord told you to do."

It was just enough, with what I had, to get me a round trip ticket to Kennebunk Camp Meeting. Praise the Lord!

Then we got down on our knees and prayed. I said, "Now brother, you might just as well settle this thing. The Lord is willing to bless you. Why don't you let him? Why not be obedient now? The Lord can do it now if you will just trust Him."

So while kneeling it came to me to sing a verse or two of that old hymn of Charles Wesley's:

"Come, O, Thou traveler unknown,
Whom still I hold but cannot see.
My company before is gone,
Am I am left alone with Thee," etc.

After singing I said to him, "Now, Brother Palmer, pray and let go."

So he did. My! How he prayed! The Lord broke him all down. He got blessed while he was praying. I prayed a little and then I sang the next verse:

"In vain Thou strugglest to get free,
I never will unloose my hold;
Thou art the man that died for me,
The secret of Thy love unfold.
Thy mercies never shall remove,
Thy nature and Thy name is Love."

Then the blessed Spirit fell upon him, and he launched out into light and liberty. Oh! How he praised the Lord. What a morning that was in that little attic room on Amity Street.

And, indeed, what a ministry this "washerwoman evangelist" had in the service of her Lord. And how winningly she tells it in her Autobiography—a "must-read" for anyone interested in the holiness movement.