What is the origin of the anchor as a Christian symbol, and why do we no longer use it?

What is the origin of the anchor as a Christian symbol, and why do we no longer use it?

I have heard [the Christian musician] Michael Card say that the anchor was a primary Christian symbol until about 400 AD. Is this correct? And what is the origin of the symbol?

The anchor became a key Christian symbol during the period of Roman persecution. As Michael Card observes in his recent album, Soul Anchor: "The first century symbol wasn't the cross; it was the anchor. If I'm a first century Christian and I'm hiding in the catacombs and three of my best friends have just been thrown to the lions or burned at the stake, or crucified and set ablaze as torches at one of [Emperor] Nero's garden parties, the symbol that most encourages me in my faith is the anchor. When I see it, I'm reminded that Jesus is my anchor."

Christian use of the anchor echoed Hebrews 6:19: "We have this hope as an anchor for the soul, firm and secure." (NIV) Epitaphs on believers' tombs dating as far back as the end of the first century frequently displayed anchors alongside messages of hope. Such expressions as pax tecum, pax tibi, in pace, or "peace be with you" speak to the hope Christians felt in their anticipation of heaven. Archaeologists found about 70 examples of these kinds of messages in one cemetery alone.

But where did Christians get the idea to use an anchor in the first place? The anchor appeared as the royal emblem of Seleucus the First, king of the Seleucid dynasty established after Alexander the Great's campaigns. Seleucus reputedly chose the symbol because he had a birthmark in the shape of an anchor. Jews living under the empire adopted the symbol on their coinage, though they phased it out under the Hasmonean ruler Alexander Jannaeus around 100 B.C.

An even stronger explanation can be found in church history. Around 100 A.D., the emperor Trajan banished the fourth pope, St. Clement, to the Crimea. When the pope converted the people there, Trajan ordered that Clement be tied to an iron anchor and drowned. Tradition holds that the sea then receded three miles to reveal Clement's body buried by angels in a marble mausoleum. This is hardly a believable tale, but the story of Clement's martyrdom clearly inspired the persecuted Church.

Given its power, why did the anchor fade from use? Scholars have found only a few examples dating as late as the middle of the third century, and none after 300 A.D. Their most common explanation is that as the Empire went from persecuting the Church to sponsoring it, Christians no longer needed secret symbols to identify themselves. Constantine's conquering cross replaced the anchor as a source of encouragement to believers in troubled waters.

Other scholars, though, think the anchor slipped from use because the "symbol" was actually a word play in Greek—ankura resembling en kurio, or "in the Lord"—which disappeared as Christians chose Latin over Greek as their primary language.

Whatever the case, the anchor did not reappear until the 1600s, when it experienced a two-century renaissance, particularly as a symbol engraved on tombs. One wonders if the recent interest stirred by Michael Card marks the beginning of a new revival of this ancient symbol.

*Searches on the Internet turn up rather sketchy history of the anchor, though it's still possible to piece it together. Michael Card's observations cuts to the chase, while the online entry in the Catholic Encyclopedia gives a succinct overview. The site also offers a 9-page biography of St. Clement. You'll find a mention of the anchor's origin with the Seleucid dynasty at: http://members.aol.com/fljosephus/coins.htm. 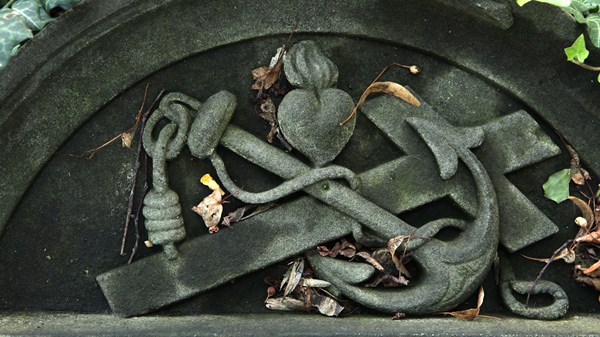 What is the origin of the anchor as a Christian ...