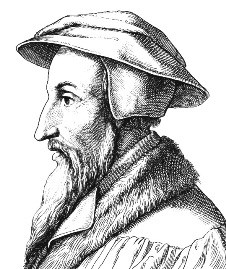 The deluge of tribute articles reminds us that John Calvin's 500th birthday is right around the corner. This week, Christians around the world will observe July 10, 1509, as a turning point in world history. The man who ridiculed relics and requested no tribute in death might shudder at the notoriety. But he would certainly appreciate learning how his voluminous writings have circulated the globe and equipped generations of gospel ministers.

Calvin might also like to know that his life's work still beckons church leaders today to call for reform. Historian and pastor Charles Hambrick-Stowe appealed to his legacy to encourage reform-minded mainline ministers during the UCC General Synod on June 28. A scholar with impressive breadth of expertise, Hambrick-Stowe now shepherds the flock as senior pastor of First Congregational Church in Ridgefield, Connecticut. Speaking for the Faithful and Welcoming luncheon, Hambrick-Stowe reviewed the heart of Calvin's theological vision for ministry and recapped what Congregationalists have lost by neglecting this key component of their heritage.

Calvin taught that salvation comes by faith alone through Jesus Christ, not by anything we do, Hambrick-Stowe explained. He bowed to the authority of Scripture, not to the papal office. And he sought to reform both the civil sphere and church life under a God who exercises sovereignty over all things. Yet the mention of Calvin's name elicits shrugs and shame in the UCC today, Hambrick-Stowe lamented.

"For many decades now in our denomination, Calvin has been seen â€" at best â€" as an embarrassment, the crusty old uncle that you wish would stop coming to family gatherings," he explained. "If Presbyterians still wanted to engage in conversation with Calvin that was their business, we were too progressive-minded for that and it wasn't too hard to ignore him as we adapted ourselves to modern, more supposedly relevant ways of thinking."

Today, the UCC engages in a wide variety of social reform efforts, exercising belief through charitable behavior. This activist tendency stems from the Calvinist legacy, according to Hambrick-Stowe. Yet something is missing, he insisted.

"But â€" and this, it seems to me, is the spiritual problem of the United Church of Christ â€" our commitment to faithful living is no longer rooted in a theology of redemption," Hambrick-Stowe said. "In many places and at many organizational levels of the church, the very concept of justification and sanctification are ignored or even rejected as obsolete, meaningless, or hurtful doctrines. Salvation is construed as getting in touch with your true self, perhaps especially your true gendered self, so if there is a theological emphasis at all it is on the doctrine of creation (â€˜God doesn't create junk') and, with regard to Jesus, the doctrine of the Incarnation, God-with-us, validating us just as we are. But . . . the Fall? Atonement? Reconciliation of sinful humanity with the God of holiness? Word that Christ died for our sins? Who in our churches knows what any of this means anymore?"

What a treasure it would be if, centuries later, Calvin's ecclesial descendants rediscovered his gift for pairing justification with sanctification. These are the great truths of Scripture that launched a Reformation 500 years ago and bring reformation still today.

"This is not dry doctrine, not mere dogma," Hambrick-Stowe said. "It is a vital expression of the Christian narrative. Our story as believers. God's story of human redemption. As preachers, when we get people into the biblical narrative, that gospel gets into the people. God's story becomes our story. Throughout the world people are finding hope in this gospel and as that happens churches are thriving. That is the hope for our people and our churches, whatever the future of the United Church of Christ as a denomination."