Where shaving was accompanied by psalm-singing and bloodletting was more frequent than bathing.
Chris Armstrong 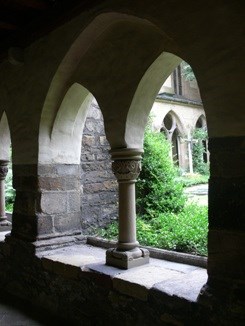 Last week was a good one: we spent it at our friends' Wisconsin cabin, enjoying swimming, boating, fishing, tubing, and even a close encounter with a bald eagle.

What made the week even better was the book I took with me to relax with on the dock as our kids swam. This was Christopher Brooke's The Age of the Cloister: The Story of Monastic Life in the Middle Ages (Mahwah, NJ: Paulist/HiddenSpring, 2003).* A few samples:

The razors for shaving were kept by one of the monks under the chamberlain's jurisdiction, locked in a box in the cloister near the door to the dormitory. At the appointed time he organized a group of monks in two rows in the cloister, one row to shave, the other to be shaven, and the task was performed to the accompaniment of a psalm. (79)

"â€˜As to our baths,'" says a chronicler, "â€˜there is not much that we can say, for we only bath twice a year, before Christmas and before Easter.'" (79)

Once a month or so all the monks had a blood-letting and a holiday, when they could enjoy the less arduous, more relaxed routine of the infirmary, where meat might be eaten and a briefer round of services attended. (80)

In every large community the fishponds were vital, providing some relief from the salt fish that seems to have played a heavy role in the monastic diet. (81)

Brooke, an emeritus Cambridge University professor and leading medieval scholar, gives us a sympathetic portrait of monasticism largely between 1000 and 1300, prefaced by a basic narrative of the history of monasticism from its roots in Egypt through the founding of Cluny around 900, and concluding with an epilogue moving the narrative beyond 1300.

I appreciated not only Brooke's clearly careful scholarship, but also his affinity for his subject. The Age of the Cloister provides a welcome antidote, for example, to William Manchester's World Lit Only by Fire: The Medieval Mind and the Renaissance: Portrait of an Age. The latter book uses the time-honored technique of telling a ripping yarn and along the way confirming readers' worst prejudices about the history of the church. As of this writing, it sat at #720 on the Amazon sales rankings, while Brooke's beautifully and overall accurately written book sat at #72,540. Yet another sign of the collapse of Western civilization.

Despite his essential sympathy with them, Brooke does not always spare the warts and flaws of his subjects. He acknowledges, for example, that both the strength and the weakness of Benedict's Rule lie in his "vision of the abbot, who is assumed to be both a notable spiritual director and a master in handling human relations." Brooke concludes succinctly, "Such men are rare." (49) Bernard of Clairvaux, too, comes in for appropriate critique on his less-than-charitable treatment of various opponents.

Along the way, Brooke corrects stereotypes:

The writings of the early monastics were full, above all, of "pleas for moderation."

Contrary to popular opinion, "learning never became a normal characteristic of any medieval religious order or of any large group of monasteries." However, the monasteries did tend to have some of the best libraries in the West, thus "when men of a scholarly turn of mind grew up in the cloister, they could thus sometimes find the food they needed to hand." (52)

"The attack on worldly distraction in Cassian or Bernard's Puritanism was not coupled with distrust of all human emotions and values. In the most fundamental sense of the term, in their interest and belief in human capacity and human emotions, both were humanists." (42)

Yet though perhaps "humanists" in this sense, despite their program of "heroic effort," the monastic teachers were no Pelagians. They "saw the whole process of man's perfectibility within the economy of divine grace." (43)

The book is also full of important distinctions: the Benedictine traditions such as that at Cluny were not properly speaking "orders," as the mother houses did not hold much legislative or executive authority over their "daughters" (by these lights, the Franciscans and Dominicans were really the first true monastic orders). Though often muddled, the terms monk, friar, and canon refer to three different realities: The monk is a cloistered individual, almost always in the Benedictine tradition; the friar a non-cloistered, mendicant member of a religious order; the canon a secular (that is non-cloistered, parish) priest who nonetheless lives a "regular" life - that is, lives according to a rule.

The fourth chapter, "Life, Work and Prayer," is alone worth the price of admission. Here we get a clear sense of the monastic routine, in which "from soon after midnight till late in the evening the bell rang every hour or two to summon the monks to the office." We confidently list Matins, Lauds, Prime, Tierce, Sext, Nones, Vespers, and Compline as "the monastic hours," but Brooke tells us that though medievals had hourglasses and sundials, we don't know to what extent they used them, and it is fairly clear that those offices were rung not on exact clock-hours, but simply at fairly regular intervals. (70-71)

There is much more to discover in this book. Chapter 6 shows us how cloister and world interacted. Chapter 7 details the monastic impact on that intellectual and cultural revival now commonly called "the twelfth-century renaissance." Chapter 8 opens to us a monastic tradition that existed in parallel with the Benedictine one of the cloistered monks: the life of the priestly canons under variations on a Rule originating from Augustine. Chapter 9 is dedicated to the Cistercians, chapter 10 to the crusading religious knights (e.g. the Templars), 11 to the women who headed their own monastic houses ("abbesses" and "prioresses"), and 12 to the rise of the Premonstratensian and Franciscan orders.

Throughout, Brooke shows us fascinating ways in which the plans and ruins of monastic buildings, when taken together with key texts, illuminate many aspects of the monastic life. He brings this material together with particular clarity and insight in the book's third part, which begins with tours of "three of the most evocative monastic sites in Europe" (235): Fountains Abbey in Yorkshire, England; Mont Saint-Michel in France; and Sant' Ambrogio, Milan. He concludes this section with a survey of the "monastic map of Europe" as it stood in 1300 and an epilogue tracing monastic developments since that year.

*The Age of the Cloister had two earlier incarnations: as The Monastic World, 1000-1300 in 1974 and as Monasteries of the World 1000-1300 in 1982. In all three versions, it is graced by plates of monastery floor plans and photographs of monasteries by Wim Swaan. This newest edition contains some updates (including, helpfully, new sources in the bibliographic notes section) and an introduction covering advances in monastic history since the first edition.