Auguste Hermann Francke (1663–1727) was one of the leading figures of the Pietist movement of the late seventeenth and early eighteenth centuries. His spiritual struggle and pilgrimage is typical of many in the movement and were included in his “Autobiography” which was first published in 1692. Other biographical details on Francke are found in the Gallery and an excerpt from his essay on “Christian Perfection” is found in “On Christian Perfection”.

As far as my Christianity was concerned, particularly during my few years in Leipzig, it was very bad and gross. My intention was to be an eminent and learned man, to gain wealth and to live in good days … The surges of my heart were vain and were directed to future things which I did not have in my hand. I was more concerned to please men and to place myself in their favor than I was for the living God in Heaven. In external matters as well, I copied the world in superfluous clothing and other vanity. In short, inwardly and outwardly I was a man of the world and did not remove myself from evil but drew evil to myself. My knowledge increased but because of it I was ever more pompous. I have no cause to complain to God because of this situation, for God did not cease often very strongly to stir up my conscience and to call me to repentance through his Word. I was truly convinced that I was not in the proper state. I often cast myself down upon my knees and asked God for improvement. The result, however, demonstrated that my actions were of passing intensity. I knew very well how to justify myself before men, but the Lord knew my heart. I was in great unrest and in great misery, yet I did not give God the honor to acknowledge the basis for my disease nor did I seek in him alone ...

ConfessionEvilFaith and PracticeJoyPietismRepentanceSinSuccess
Issue 10: Pietism: The Inner Experience of Faith, 1986
Previous Article
Pietism: Did You Know?

Next Article
From the Archives: Examining the Candidate 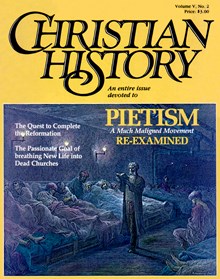