Offered to him in Sacrifice

The following letter was addressed by Calvin to five of his colleagues facing execution after Calvin’s efforts to intercede proved fruitless. The five were burned at the stake facing the end with composure, singing psalms, repeating passages of scripture and exhorting each other to courage.

We have at length heard why the herald of Berne did not return that way. It was because he had not such an answer as we much desired. For the King has peremptorily refused all the requests made by Messieurs of Berne, as you will see by the copies of the letters, so that nothing further is to be looked for from that quarter. Nay, wherever we look here below, God has stopped the way. This is well, however, that we cannot be frustrated of the hope which we have in Him, and in His holy promises. You have always been settled on that sure foundation, even when it seemed as though you might be helped by men, and that we too thought so; but whatever prospect of escape you may have had by human means, yet your eyes have never been dazzled so as to divert your heart and trust, either on this side or that. Now, at this present hour, neccessity itself exhorts you more then ever to turn your whole mind heavenward. As yet, we know not what will be the event. But since it appears as though God would use your blood to sign His truth, there is nothing better than for you to prepare yourselves to that end, beseeching Him so to subdue you to His good pleasure, that nothing may hinder you from following whithersoever he shall call. For you know, my brothers, that it behoves us to be thus mortified in order to be offered to Him in sacrifice. It cannot be but that you sustain hard conflicts, in order that what ...

Next Article
From the Archives: To Luther 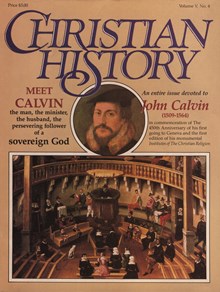