Meet the first known dramatist of Christianity, the most famous female exegete of the nature of the Trinity, and the author of the earliest known autobiography in English.
Katharina M. Wilson 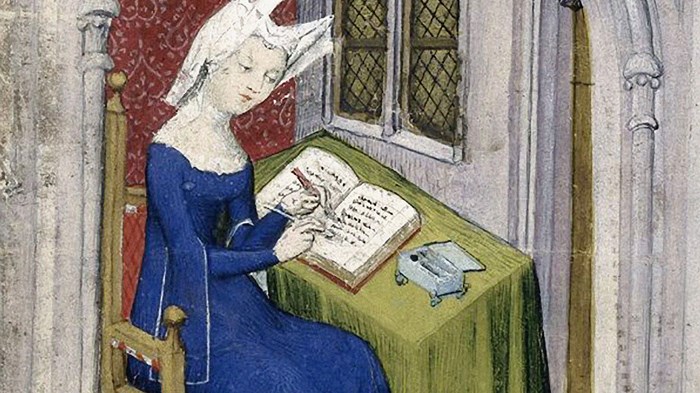 Image: Wikimedia Common
Current Issue
January/February 2020Subscribe
Read This Issue
Subscribe to Christianity Today and get instant access to past issues of Christian History!
Follow @ctmagazine
Free Newsletters
Get the best from CT editors, delivered straight to your inbox!

Hrotsvit lived in the tenth century (932–1002) as a canoness of the Imperial Saxon Abbey of Gandersheim (Germany). She can best be described by a catalogue of pioneering achievements: she is the first known dramatist of Christianity; the first Saxon poet; the first female Transalpine [north of the Alps] historian; and the author of the only extant Latin epics written by a woman.

According to her own testimony she objected to the great popularity of [Roman author] Terence’s plays, which depicted lascivious pagan women frolicking in the pleasures of the flesh. She wanted to compose dramas substituting the heroines of Christianity: beautiful, chaste virgins, firmly resisting the insidious advances of pagan men. To show “frail Christian virgins” triumph with Christ’s aid was her stated dramatic intent.

Hrotsvit is a polished stylist who doesn’t lack a sense of humor, either. In one of her plays, Dulcitius, the protagonist is a pagan would-be executioner of three Christian virgins. He imprisons them close to the pantry so as to visit and seduce them secretly at night. As he enters the pantry, however, he is miraculously deluded and mistakes the dirty pots and pans for the girls. The scene is related by the girls, who peeping through the keyhole observe the foolish Dulcitius romancing kitchen utensils.

Hrotsvit’s works were rediscovered centuries later by a German scholar, who in 1501 made her texts available for posterity.

Writer of solitary devotion to God

Julian of Norwich is perhaps the most famous female exegete of the nature of the Trinity—particularly of Christ’s mediating role between God ...

Christian Women Writers of the Medieval World
Hide This

This article is from Issue 30 of the Christian History archive.