Highlights of the California Missions

Highlights of the California Missions

Junípero Serra and his successors established 21 missions in California between 1769 and 1823. Each mission was a combination military outpost and religious commune; together, they were a colorful experiment in missions.
Mark Galli
Current Issue
January/February 2020Subscribe
Read This Issue
Subscribe to Christianity Today and get instant access to past issues of Christian History!
Follow @ctmagazine
Free Newsletters
Get the best from CT editors, delivered straight to your inbox!

(2) San Rafael Arcángel (1817) Located in a sunny clime, this mission was a health sanctuary for ailing neophytes from the chilly San Francisco mission. On the day of its founding, 200 Indians presented themselves for catechism.

(3) San Francisco de Asís (1776) Its first worship service was held five days before the Declaration of Independence was signed. From 1821 to 1826, disease killed 1,570 Indians here.

(4) San José de Guadalupe (1797) Father Narciso Duran taught the mission Indians to read music and play European instruments, and he then formed a 30-piece band. Indians came from miles to hear the concerts.

(7) San Juan Bautista (1797) Although built on the San Andreas fault, its major buildings have survived. The 1812 sanctuary is still used for worship.

BaptismConversionEvangelismInternationalMissionsMusic
Issue 35: Columbus & Christianity in the Americas, 1992
Previous Article
The Father of California

Highlights of the California Missions
Hide This 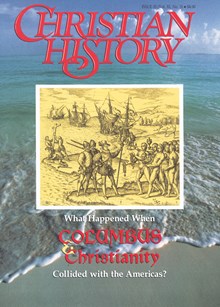