The first black pastor to lead a white congregation, the start of the AME, and slavery splits American denominations.
A. G. Miller

1701 The Society for the Propagation of the Gospel in Foreign Parts (SPG) begins missionary work among Native Americans and, later, African slaves. Overall, this Anglican organization is not a success among either group.

1730 John Wesley comes to Georgia with the SPG as a missionary to the Native Americans and African slaves. When his missionary efforts prove ineffective, he returns to England.

1758 The first recorded black congregation organizes on the plantation of William Byrd, near Mecklenburg, Virginia.

1773 Black Baptists found a church on the plantation of George Galphin, at Silver Bluff, South Carolina.

1773 Phillis Wheatley's Poems on Various Subjects Religious and Moral is published in London.

1775 War breaks out between Great Britain and its 13 American colonies.

1776 Black Baptist churches organize in the Virginia cities of Williamsburg and Petersburg.

1776 The Declaration of Independence acknowledges "certain inalienable rights … life, liberty, and the pursuit of happiness."

1780 The Methodist denomination requires all its itinerate preachers to set their slaves free.

1784 The first General Conference (the Christmas Conference) of the newly formed Methodist Episcopal Church forbids its members to own slaves.

1787 Absalom Jones and Richard Allen lead a small group of Africans out of Philadelphia's St. George Church after being forced to give their seats to white congregants. (Some scholars argue this occurred in 1792).

1787 Philadelphia blacks, including Richard Allen and Absalom Jones, organize the Free African Society as a burial society and support organization for widows and orphans.

1788 Andrew Bryan, born a slave in 1737, organizes the first African Baptist Church in Savannah, Georgia. By 1800 the church had 700 members. Bryan's mentor was another slave preacher, George Liele, who had escaped slavery during the Revolutionary War, settled in Jamaica, and organized the first black Baptist church in the Caribbean Islands.

1794 Richard Allen purchases a lot at the corner of Philadelphia's Sixth and Lombard Streets, moves a blacksmith shop to the site, and invites Bishop Francis Asbury to dedicate it as a worship center named Bethel Church.

1804 The Republic of Haiti is established as result of an eight-year war between rebelling slaves and France.

1809 The Abyssinian Baptist Church is founded.

1815 Elders of St. George's Church take the leadership of Richard Allen's Bethel Church to court, hoping to maintain control of the operations of the black Methodist congregation. They lost before the Pennsylvania Supreme Court January 1, 1816.

1819 Jarena Lee, one of the premiere female black preachers, begins her preaching career.

1820 The Missouri Compromise prohibits slavery in all states north of 36 degrees 30 minutes north latitude (except Missouri).

1822 The First Colored Presbyterian Church of New York is founded with Samuel Cornish as pastor.

1822 An insurrection planned by Denmark Vesey, a member of the African Methodist Episcopal Church of Charleston, is discovered in Charleston, South Carolina.

1823 Julia A. J. Foote, the daughter of former slaves from Schenectady, New York, becomes a powerful preacher within the AMEZ Church, helping the denomination to be the first black church to ordain a woman as elder 75 years later.

1829 David Walker, a freeborn South Carolina African American, publishes his critical essay against American racism, Walker's Appeal in Four Articles, Together With a Preamble to the Colored Citizens of the World, But in Particular and Very Expressly to Those of the United States of America.

1830 James Augustine Healy, the first black Roman Catholic priest in the United States, is born to an Irish father and a mulatto slave mother. He and his brothers and sisters rose to several prominent positions within American Catholicism. Because of their light complexion they were able to move in the white world undetected as having African ancestry. Patrick Frances Healy (1834-1910) was the first black Jesuit, the first black to earn a doctorate, and the second president of Georgetown University. Eliza [Sister Mary Magdalen] (1846-1918) was an educator and later became convent superior of Villa Barlow at St. Albans in Vermont. She was transferred to the College of Notre Dame as superior on Staten Island during the last year of his life. Hugh, born in 1832, was also ordained a priest and died in his early 20s.

1830 The American Society of Free Persons of Color for Improving their Condition in the United States meets at Richard Allen's Bethel Church in Philadelphia. These conventions, which were dominated by black ministers, were an attempt by the free black community to strategize ways to end slavery in America and to end discrimination by whites in the North.

1831 Nat Turner leads an insurrection in Southampton Virginia. At least 57 whites are killed before the revolt is put down.

1837 Amanda Berry Smith (1837-1915) is born in Long Green, Maryland. After the death of her husband in 1869 she began to preaching before mixed audiences in the southern Reconstruction and North. In 1878, Smith was invited England where she ministered for two years, then went to India for a year. She then spent eight years of ministry in West Africa, starting in 1881, before she returned to the United States.

1842 Sisters of the Holy Family, The Catholic religious order, is founded by Henriette Delille, a free French mulatto woman who worked among the poor black citizens of New Orleans.

1843 Black Presbyterian pastor Henry Highland Garnet gives a fiery "Address to the Slaves," in which he calls for slaves to rebel.

1843 Isabella Baumfree (1797-1883) changes her name to Sojourner Truth and begins a career as preacher, abolitionist, and feminist.

1844 The Methodist Episcopal Church separates over the issue of slavery, forming North and South branches.

1849 Harriet Tubman (c. 1821-1913) escapes slavery from the Maryland Eastern Shore. Following the North Star as her guide, she made some 19 trips into the South, and leading some 300 blacks to freedom.

1850 Passage of the Fugitive Slave Law makes the apprehension of blacks, ex-slaves or not, relatively easy.

1853 Representatives from seven states organize the Western Colored Baptist Convention, which lasted until 1857.

1854 The Kansas-Nebraska Act declares that the residents of new territories have the right to decide the slave issue for themselves.

1856 The Methodist Episcopal Church North establishes Ohio's Wilberforce University, named for the famous British abolitionist, to educate blacks. The AME Church, under the leadership of Bishop Daniel A. Payne, purchased Wilberforce University in 1863, making it the first college for African Americans owned and operated by a black organization.

1857 In the Dred Scott case, the Supreme Court declares that slaves are property, even when living in a free state, and that Congress cannot forbid slaveholding.

1860 The Confederate States of America secede.

1864 The American Missionary Association sends Sara G. Stanley, an African American educated at Oberlin college, south to educate the newly freed slaves. She was one of many blacks and whites who saw the education of former slaves as their calling.

1865 The Confederate States surreder and the United States Congress passes the Thirteenth Amendment, which abolishes slavery except for convicted criminals.

1870 The Fifteenth Amendment establishes right to vote for black men.

In 1998, PBS ran an excellent documentary titled Africans in America: America's Journey Through Slavery. It's truly one of the best (if not the best) video series on the topic we've ever seen, and dedicates a lot of time to the role Christianity played in the slaves' lives as well as to the stories of black Christians in the North (like Richard Allen, founder of the African Methodist Episcopal Church). The four-part documentary is now available on video. But its companion pieces may be even better. The book, by the same title, weaves together primary source documents, short stories (by renowned author Charles Johnson), and narratives and comes up with one of the most innovative book formats we've seen. It's incredibly riveting, too. And one cannot overly praise the series' companion website, either (more on that below).

The best online resource about African Americans before the Civil War—perhaps the best resource on the subject period—is PBS's companion site to its documentary Africans in America. The narrative is informative, but its true strength lies in its "resource bank," which includes one of the best-ever collections of images and primary-source documents. There's also an excellent teacher's guide. I can't count how many times we visited this site while researching this issue. 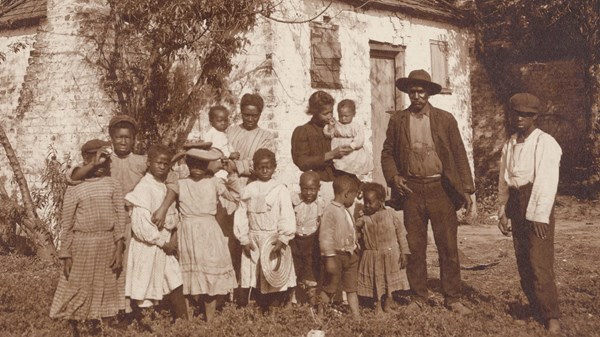