A few monks—and eventually most of the church—found both Augustine and Pelagius a little too extreme.
David Allen

The verbal battle between Augustine and Pelagius raged for a full 25 years before the final condemnation of the latter's views at the Council of Ephesus in 431. Though Augustine's views triumphed, not everyone was happy with the outcome.

In Provence, an area of southern France, a group of monks who had all spent time in the important monastery on the Isle of Lérins (opposite the modern resort of Cannes) set about correcting what they saw as the extremism of both Pelagius and Augustine.

John Cassian (360-433), while visiting Egypt to learn spiritual secrets from its famed monks and hermits, heard this from a wizened monk named Chaeremon: "The grace of God always cooperates with our will for its advantage … and sometimes requires and looks for some effort of good will from it that it may not appear to confer its gifts on the sluggish."

This is the earliest expression of what came to be known as Semi-Pelagianism—a view that Cassian embraced and later began to propagate. The key word is cooperation: no one can save himself but, by cooperating with the grace of God, salvation can be appropriated by anyone.

Cassian clearly felt that Augustine's stress on predestination ruled out any need for human cooperation or consent. Cassian also disagreed with Augustine on the capabilities of the human will, especially after salvation. "When God for any wise reason—discipline, for example—withdraws grace," Cassian wrote, "the will is able to hold on for some time awaiting its restoration."

Cassian's misgivings were shared by Vincent of Lérins (died 450). In his Commonitorium, Vincent catalogued heresies and dangerous theological innovations, and he also listed an "honor roll" of theologians, teachers, and bishops who had, in Vincent's opinion, ... 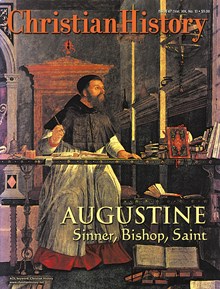