In their press statement, these conservatives said:

In his 2008 State of the Union, President Bush said:"Our Emergency Plan for AIDS Relief is treating 1.4 million people. We can bring healing and hope to many more. So I ask you to maintain the principles that have changed behavior and made this program a success." Instead, the Democrats have decided to radically change or abandon the principles of this widely successful program. Their radical rewrite will pour billions into the hands of abortion providers with little or no regard for the pro-life, pro-family cultures of recipient countries. It also strips provisions that ensure priority funding for the highly effective abstinence and fidelity programs, which have reduced HIV rates in African nations that have implemented ... 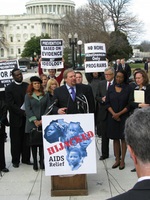