Two men who were trying to lighten the mood by selling "Obama Waffles" were asked to leave this afternoon after protesters found the boxes racist. 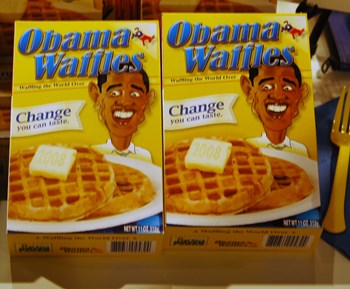 Men from Tennessee traveled to the Values Voter Summit to sell yellow boxes of waffle mix that portray a caricature of Democratic presidential candidate Barack Obama with a Muslim-like headdress and says "Point box toward Mecca for tastier waffles." The cover of the box portrays a caricature of Obama's face next to waffles, which three protesters from American Atheists found offensive.

Eric Herrman from American Atheists said the box was racist because it conjures up images of Aunt Jemima, the woman portrayed on a syrup bottle.

"Let's say we sold a pig lipstick product, we probably have to leave for the same reason," Herrman said as he handed out literature outside the Hilton Hotel. "A caribou barbie doll would be considered so sexist."

Herrman and two others from the organization said they sent reporters down to look at the waffle mix. When they found out that the vendors were asked to leave, they high fived each other.

Spokesman for Family Research Council J.P. Duffy said that those in the organization did not look closely at the box until someone brought it up. Duffy said the executive director thinks the box is racist and if Joe Biden were portrayed, it would have been fine.

"He thought it was just about Obama waffling on the issues. We had no idea until looking at it closely what was on the box," Duffy said. "It's just that this could be taken offensively." 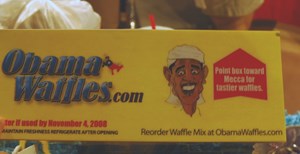 The booth was set up yesterday and displayed large posters of what was on the front and back of the waffle box. Several organizations like Summit Ministries and the Witherspoon Fellowship set up booths, but the booth selling waffles was the only satire product.

"We have dozens of booths and we don't know what kind of material they have. Obviously we don't necessarily approve of the material," Duffy said. "We may have given them permission to purchase a booth, but if there's anything like that that crosses the line, we ask them to cease and they did."

Bob DeMoss, who created the product and said the boxes have been called racist before, packed up his boxes this afternoon.

"What's wrong with Aunt Jemima? I always looked at that as a symbol of quality. Betty Crocker or Emeril's are made up characters. They don't get it." he said. "It's unfortunate; they have their freedom of speech and it'd be nice if we had ours." 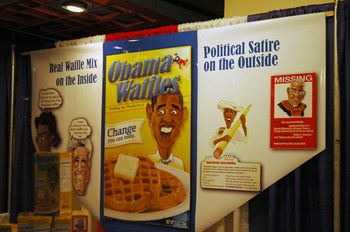 DeMoss said that some have been offended by the top of the box.

"Does he have Muslim roots or not? That's a legitimate question. That might offend somebody, but you know what, that's part of the political satire and we're raising the question," DeMoss of of Franklin, Tennessee said. "I'm not questioning where his soul is today, he denies he has any Muslim roots at all. There seems to be contrary evidence to that."

A caricature of Rev. Jeremiah Wright is portrayed on the side as a missing person above "Popular sayings: 'God d*** America' and "Made in the US of KKA." Obama broke ties with his former pastor after portions of Wright's sermons were aired in the media.

"He waffled on the friendship and it's like, well wait a minute," DeMoss said. "You were comfortable for 20 years sitting in the pew, but now you're saying 'I don't want anything to do with you.'"

DeMoss didn't know how many had sold at $10 a piece but said, "They're selling like hotcakes." One man from Ohio bought 10 boxes before his booth was shut down. He began making the boxes six weeks ago and said Books-A-Million already plans to sell them on their shelves. 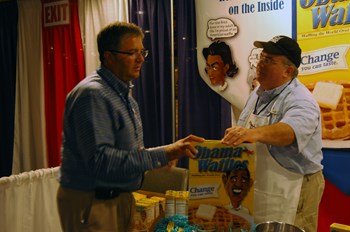 "We're just trying to have a satirical look at it. We're trying to add some humor to the entire exchange," he said. "Letterman and Leno, the New York Times and Newsweek did a piece on how you can't make a joke about him. We're like 'Why? It's the public square.'"

Above the nutrition facts, it says "Limitations of use: Not for use in military settings; product has not been field-tested. Results may be undesirable."

Spellin' it out, 'cause I graduated college

Some say I waffle so fast, Barry's causin' whiplash

Just doin' my part, made wafflin' a fine art

For a waffle wit style, like Chicago's Magnificent Mile

Spray whipped cream around the edge

Then say wit me, I can be as waffly as I wanna be!

(That goes out to my Ludacris posse)" 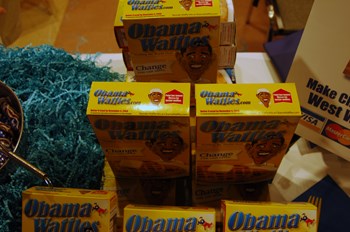 The back of the box includes a drawing of John Kerry saying "I know a thing or two about wafflin' and I approve this mix" and Michelle Obama saying "For the first time in my adult life I'm proud of an American waffle."

Obama is depicted with a Mexican sombrero above "Open Border Fiesta Waffles." The description says, "The greatest danger of all is to allow walls to divide us. It's time we opened our borders and our wallets to all who desire a taste of reedom. So put out the welcom mat and enjoy this multicultural celebration."

The fiesta waffle description includes a tip: "While waiting for these zesty treats to invade your home, why not learn a foreign language? Recommended serving: 4 or more illegal aliens"

"We strongly condemn the tone and content of materials that were exhibited by one of the vendors at this weekend's Values Voter Summit. The materials represent an attempt at parody that crosses the line into coarseness and bias."

"The exhibitor contacted our reviewer just days before the Summit by email and described material that sounded like it was devoted to political flip-flops on policy issues. When the content of the materials was brought to the attention of FRC Action senior officials today, they were removed and the exhibit was dismantled by the vendor at our insistence. It is our responsibility to fully vet materials that are offered at any event we cosponsor, but we are deeply dismayed that this vendor violated the spirit, message and tone of our event in such an offensive manner."

"The Values Voter Summit represents a coming together of many long-established organizations that work across denominational and ethnic lines to celebrate and promote the family and a culture of life. We reject any communications that divide and distract us and frustrate these principles. Bishop Harry Jackson's High Impact Leadership Coalition, Gary Bauer's American Values, and Alliance Defense Fund join us in rejecting this material."