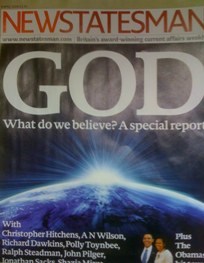 Former atheist A. N. Wilson has slowly emerged from the closet as a believer - again. The renowned journalist and biographer, who was raised in the church of England and who had once considered himself a believer, had a "conversion" to atheism 20 years ago at age 38 (midlife crisis, anyone?). And it really looked like a conversion. In an article in the April 6 New Statesman (partial text available here), he compares the tremendous sense of relief he felt when he stopped believing to the experience of Christian converts at a Billy Graham Crusade he was covering for the Independent on Sunday:

As a hesitant, doubting, religious man I'd never known how they felt. But, as a born-again atheist, I now knew exactly what satisfactions were on offer. For the first time in my 38 years I was at one with my own generation. I had become like one of the Billy Grahamites, only in reverse. If I bumped into Richard Dawkins (an old colleague from Oxford days) or had dinner in Washington with Christopher Hitchens (as I did either on that trip to interview Billy Graham or another), I did not have to feel out on a limb.

After that conversion, his biographical writing turned to demythologizing gospel stories about Jesus and viewing C. S. Lewis through a Freudian lens. (That effort provoked an outcry among Lewis lovers.)

But Wilson never fully disbelieved, just as before his conversion he never fully believed.

"My doubting temperament ... made me a very unconvincing atheist," he writes in the New Statesman article.

That is why, he says, he should have distrusted the radical sense of relief he felt when he underwent his reverse Damascus Road experience. Now, he chronicles a more gradual conversion back to Christian belief. In last Saturday's Daily Mail, he wrote:

But, as time passed, I found myself going back to church, although at first only as a fellow traveller with the believers, not as one who shared the faith that Jesus had truly risen from the grave. Some time over the past five or six years - I could not tell you exactly when - I found that I had changed.

This gradual transition echoes C. S. Lewis's account of his transition from unbelief to faith. He knew vaguely when it happened, but it was not a blinding, fall-off-the-horse experience. And because of its more gradual nature, Wilson now seems to trust this new experience more.

One more thing worth noting: There is a strong aesthetic dimension to Wilson's return to belief. Unlike many atheists and former believers, Wilson's testimony does not hinge on what empirical science does or does not tell us. He tells us frankly that the arguments provided by atheist friends of a scientific bent were as creedal and stretching as many assertions by Christians.

A materialist Darwinian was having dinner with me a few years ago and we laughingly alluded to how, as years go by, one forgets names. Eager, as committed Darwinians often are, to testify on any occasion, my friend asserted: "lt is because when we were simply anthropoid apes, there was no need to distinguish between one another by giving names."

This credal confession struck me as just as superstitious as believing in the historicity of Noah's Ark. More so, really. Do materialists really think that language just "evolved", like finches' beaks. or have they simply never thought about the matter rationally? Where's the evidence?

The aesthetic dimension dominates the empirical for Wilson because there was something about the great Christian artists and writers of past centuries that somehow seemed true to reality. (Wilson opposes J. S. Bach to David Hume and Samuel Taylor Coleridge to Gilbert Ryle.)

Because of the gradual nature of Wilson's re-conversion, we trust he will continue to grow in grace and understanding and trust in God - as should we all, whether our conversion happened in a flash or stretched over many years.

The Victorian era saw many Christians become atheists–and then return to faith, much as A. N. Wilson has done in 2009. Read Timothy Larsen's account of their double conversions in "Victorian Skeptics on the Road to Damascus" from the Christian History website.