The National Archives recently made new audio tapes public that suggest that President Nixon believe abortion was justified in some cases, according to The New York Times.

After the Supreme Court made abortion legal through Roe v. Wade in 1973, Nixon made no public statement.

Nixon worried that greater access to abortions would foster "permissiveness," and said that "it breaks the family." But he also saw a need for abortion in some cases, such as interracial pregnancies.

"There are times when an abortion is necessary. I know that. When you have a black and a white," he told an aide, before adding: "Or a rape."

Nixon talked about his views of anti-Semitism in America in a phone conversation with the evangelist Billy Graham.Mr. Graham complained that Jewish-American leaders had denounced efforts to promote evangelical Christianity, like Campus ... 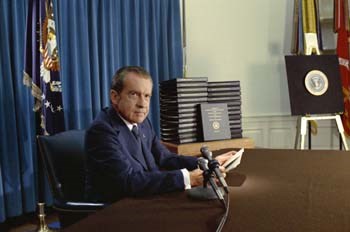