1. The upcoming TV mini-series version of Ben-Hur will be shown on ABC in the United States, though an airdate has not yet been set. Casting is still under way, but production is set to begin in May in Spain, Morocco and Canada. – Variety

2. Matthew Vaughn is looking at producing an adaptation of the comic-book series American Jesus, written by Mark Millar; the story "centers on the return of Christ in the modern world, leading to a final confrontation with the Antichrist in a bid to save humanity." Vaughn is currently finishing an adaptation of another Millar series called Kick-Ass. – Hollywood Reporter

3. Universal has hired Dan Harris to write Dante's Inferno, a live-action film that will not be based on the poem by Dante but, rather, on the Electronic Arts videogame "in which players journey through the depths of hell." Harris co-wrote X2: X-Men United (2003) and Superman Returns (2006) and is currently attached to direct I, Lucifer. – Variety 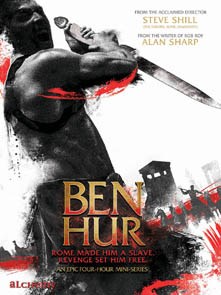