Last week, evangelical creation care entered a new phase as key pastors, scientists, and thought leaders gathered near Atlanta for a "coming out party." That's what Jonathan Merritt called the gathering as he welcomed conferees to Flourish 09, hosted by Cross Pointe Church where Merritt serves on the staff with his father, senior pastor and former president of the Southern Baptist Convention James Merritt.

Like all debutantes, the leaders of Flourish were clearly self-conscious as they tried to forge a new identity in public for the first time. Flourish president and co-founder Rusty Pritchard was the first of many to declare, "I am not an environmentalist." For Pritchard, a natural resources economist who founded the environmental studies program at Emory University, that label is loaded with overtones of judgmentalism and apocalypticism. We don't need environmentalism for us to be perceived as judgmental, said Pritchard. If you want judgmentalism, "just come to my church." 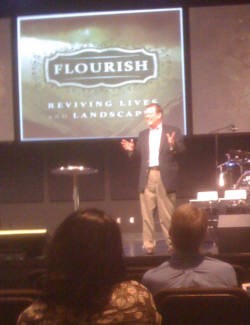