Some paleontologists are dismissing the fossil's close connection to humans.
Katelyn Beaty|May 20, 2009 10:57 AM 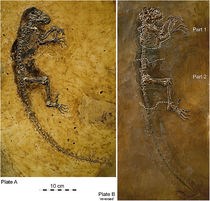 Yesterday Norwegian scientists unveiled a 47-million-year-old fossil they are touting as a crucial link in the "stem group" from which humans and other mammals came. Jorn Hurum, whose Oslo museum purchased "Ida" in 2007 from a private collector who unearthed it in 1983, has been quick to label the well-preserved, cat-like fossil the "missing link" between mammals and humans, calling it the "Holy Grail" and the "Lost Ark" of science. Following yesterday's media frenzy, a book on Darwinius masillae is releasing today, and a two-hour History Channel special is airing May 25.

"I actually don't think it's terribly close to the common ancestral line of monkeys, apes and people," said K. Christopher Beard of the Carnegie Museum of Natural History. "I would say it's about as far away as you can get from that line and still be a primate. . . . I would say it's more like a third cousin twice removed."

The bloggers for Francis Collins's BioLogos Foundation, a theistic-evolution think tank, responded to the announcement this way: "[E]ven if it is only in a peripheral way, the new fossil offers a glimpse at our evolutionary ancestors. While it may not revolutionize our understanding of evolution, the fossil is just another piece of evidence showing that evolution has occurred . . .".

Young-earth creationist ministry Answers in Genesis, on the other hand, noted that the fossil bears no connection to apes or humans, and that neither fossils nor similarities between fossils can prove evolution. The article posits that Ida's remarkable preservation is characteristic of rapid burial caused by a catastrophic flood.

What do you think of Auntie Ida? How should Bible-believing Christians respond to announcements from the scientific community such as these?