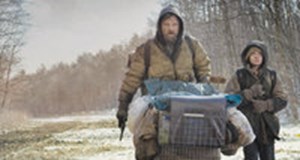 Since it would take me more time and space than I have at the moment to fully explain why I disliked The Road as much as I did, I will save that for another place and another time and instead elucidate here who I think will like it, and why.

A lot of people, and I'm not entirely sure.

Partial disclosure: I'm one of the six people in America who did not love the Pulitzer Prize winning novel, so my concerns are not about failures in adaptation. Changes from the novel are minimal and somewhat understandable. As an adaptation, the film reminded me of the Harry Potter films or The Lord of the Rings trilogy. It is successful in repainting the surfaces of the plot, but somehow loses something of the poetry, mystery, and majesty of the source material. But I recognize that I'm in the minority in my assessment of those other two franchises, and I suspect I will be here as well.

Viggo Mortensen said in introducing the film that it was not a "heartbreaking story" but a "heart opening story." Kodi Smit-McPhee said the story was not about the end of the world but about the relationship between the father and son. Readers are free to wonder if my not having a son is part of what makes it difficult for me to connect to the story; I've wondered myself.

Ultimately, I found the film, like the book, to be too much setting and not enough purpose. The lyricism of McCarthy's prose carries us past that fact in the novel. He writes so poetically and movingly that it is easy enough to get transfixed in the beauty of his words and spend little time contemplating what the words signify or whether or not it is beautiful too. As with No Country for Old Men, some of the prose is imported into the film with voice-over (though, oddly, not the final passage, which is strange given that it provides the closest thing to a coda the novel has).

Also, the novel begins en medias res, and part of its spell is the way it reveals its horrors gradually. The film elucidates most of them in the prelude, so many are reduced to the level of dangers to be avoided on an obstacle course rather than revelations. That this point is thematically important and not superficial is, I think, underscored by how often in the text the boy says, "I don't know." and the man replies, "Yes, you do." Rhetorically, this repetition reinforces the way revelation is structured in the film. It's a story about being confronted with what you already know but don't want to admit.

The thing is, though, much like the works of Melville or Faulkner, McCarthy's stories unfold in the descriptions of the action, not the action itself. Film being such a visual medium, what we end up with is a picaresque obstacle course of fires, falling trees, cannibals, and cold.

But there, I've done it; I couldn't help myself. I ended up talking about what I didn't like instead of what I think others will. Who do I expect will appreciate the film? Parents who love their children. People for whom carrying the fire and being one of the good guys is important. Most everyone who is not a cynical misanthrope or small minded film critic. 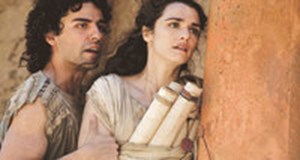 For the record, Alejandro Amenábar stated in the Q&A session for Agora that he is an atheist, but that he didn't think the film was "anti-Christian," or "anti-religious," and I agree.

He did say he thought the film was "anti-fundamentalist," which I think was (and is) an unfortunate word choice, but which I'm pretty sure based on the context of his remarks he meant to use as a descriptor for someone who imposes his or her beliefs on another by means of force. As a descriptor of the film's point-of-view, with this assessment, I would also agree.

Amenábar also said he was an optimist by nature, and this I have a hard time seeing in the film. The film's twice repeated thesis–when two things are equal to a third, they are each equal to the other–in conjunction with the moral failings of Christian, pagan, scientist, and Jew alike make it hard for me to see the film as a plea for tolerance so much as a lament for the costs (personal and corporate) of intolerance.

That the film is designed to invite parallels between fourth century Egypt and the contemporary world is clear enough (and this intention was also freely admitted in the Q&A). It's pretty impossible to contemplate the Christians throwing a man into the fire without thinking about how many of them would be later burned at the stake. It's pretty hard seeing the Pagans assault Christians for defiling their symbols and then retreating behind the protection of the law without thinking about those who would insist that Christians are the only ones who don't deserve equal protection under the law. It is hard to see those who pride themselves for being learned and enlightened men of science and reason whip their slaves for the wrongs of others and not think about how often science and technology has been the tool of the oppressor and religion the solace to the oppressed. It is hard to see the Jews of the film, forced to systematically live in a society where they have no rights, finally pick up stones and throw them back and not think of another intifada centuries later.

There will be many viewers, I suspect, who will feel the group with which they identify is singled out and represented the most unfairly. I'm not one of them. There were people who were hypocrites, cruel, and destructive in the film. Some of them were Christian and others were not. There were people who recognized their mistakes and owned them and people who refused to do so. Some of each were Christians, and some were not.

In terms of historical accuracy, the director claimed he tried to stay as true to to the sources as possible, but he admitted making changes for narrative purposes. (Examples include the means of death for one character and the changing of locations for some events because of budget constraints.) When pressed by one audience member why he chose to focus more on Hypatia than one of the Jews or Christians (a premise that I'm not sure the film supports), Amenábar said simply that he was amazed no one had made a film about Hypatia yet and wanted to do so before anyone else got the idea. What was clear to me from these comments, is that while Amenábar had political and cultural points to make, he wanted to make them in the context of a good story.

And make no mistake, Agora is a smashingly good story. I love the fact that Amenábar said he tried to limit the use of CGI in the film, instead building sets. There is a beauty and truth to the human face that no amount of spectacle can replace. There is a moment during the ransacking of the library of Alexandria when Amenábar very simply and slowly turns the camera, and it results in fifteen seconds of the most hauntingly beautiful and heartbreakingly painful images I have seen in a major narrative film in years. So, too, a shot of a character looking through a circular hole in a roof that, from the angle she is viewing it, is seen as an oval. Where that shot comes and why it is so ripe with meaning, it would be criminal for me to give away.

Still, I know there will be some who will be hung up on the historical accuracies (or inaccuracies) of the film and/or the biases (real or perceived) of the filmmaker. To them I will say that the Battle of Agincourt probably had more to do with the English longbow than King Henry V's "band of brother" speech, that William Wallace may not have yelled "freedom" as he was being disemboweled, and that just because Aslan was not a real lion doesn't mean he's not a Real Lion.

Agora is the post-9/11 film that I've been waiting for without knowing it–the one that appears to say, finally, we are defined by what we do more than what is done to us, that our greatness lies less in how much we know than in how mightily we strive to live by it.

And with that, I also agree.