Creation gets an American distributor after all. 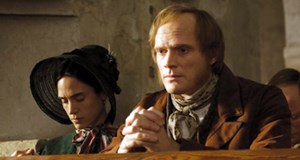 A few days ago, Brandon mentioned that the producers of Creation – one of a few movies about Charles Darwin that have been produced this year in honour of Darwin's 200th birthday – were claiming it had been difficult to find an American distributor for their film because evolutionary theory is "still a really hot potato in America."

Now, the Hollywood Reporter says an American distributor has been found for the film after all – and it is Newmarket Films, the same distributor that handled Mel Gibson's The Passion of the Christ nearly six years ago. If anyone in this business would know how to handle a "really hot potato", it would seem to be them.

Newmarket is reportedly thinking of releasing the film in December. (If they really want to stir up some controversy, they could try releasing it Christmas Day.)

Meanwhile, the film opens in its native Britain tomorrow, and in conjunction with that release, the Christian outreach organization Damaris has posted some movie-related resources at their website "to help churches, schools and community groups make the most of this film."

Creation gets an American distributor after all.

Creation gets an American distributor after ...