President Obama met with Billy Graham yesterday, the first time a sitting president has met in Graham's North Carolina home, according to his spokesman A. Larry Ross.

Franklin Graham, whose invitation to a Pentegon prayer service was rescinded last week, also attended the meeting. Here are the details from Ross:

Over coffee, the two men discussed a variety of topics, including their wives, and love for and similar experiences with golf and Chicago – where the President started his career, and Mr. Graham attended school and has had several significant crusades. Like others before him, President Obama shared how lonely, demanding and humbling the office of President can be, and how much he appreciated the counsel of people like Mr. Graham and the prayers of so many citizens.Mr. Graham presented the President with two Bibles – one for him, and other for the First Lady – after which the President prayed for Mr. Graham, who, in turn, concluded with a prayer for the President, his family and his ... 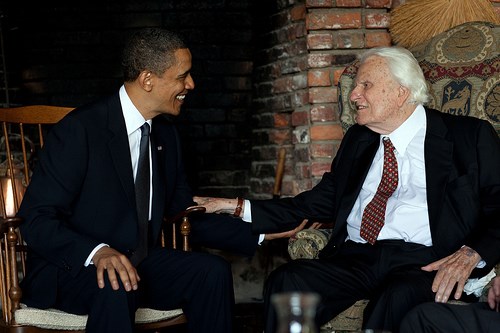