Baylor University alum David Crowder loves his Bears – so much that he wrote something of a fight song, "Rise Up," for his alma mater's football team, which will take the field to the playing of the song at every home game this season.

Crowder had seen some of the team's commercials over the summer, which had the theme of "rise up." He went to sleep one night, and woke up the next day with the song in his head.

"I don't want to talk about Manifest Destiny," he told Baylor, "but I woke up the next morning and I'm sort of in a dream state with this song in its entirety. Later in the day I remember I had a song in my head when I woke up, and I started talking to a guy I work with. I said I feel like I had a dream, something about Baylor football, and I started reciting lyrics to it. About halfway through, I go, 'This is a good song. I gotta go, I gotta record it quick before it disappears.' So that day I recorded it and sent it to some folks in the athletic department, and they got pretty ... 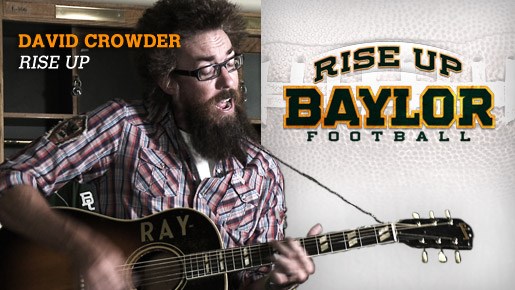