Katy Perry Too Racy for Elmo?

It's not unusual for big-name celebrities to appear on Sesame Street, so when the popular show started previewing its upcoming season online this week, we saw the likes of Jude Law, Will.i.am, Colin Farrell, and others – including pop star Katy Perry singing a kid-friendly version of her song "Hot N Cold" with Elmo.

Turns out that Perry's clothes showed a bit too much cleavage for some parents, who posted such comments as: "Couldn't she wear something that was more . . . APPROPRIATE," and "I DO NOT want my five year old lookin at [that]!" Sesame Workshop, the folks behind the show, Sesame Street, responded by deciding not to run the clip on the show after all. Actually, Perry's outfit wasn't as revealing as at first glance: she wore a flesh-colored mesh top that went all the way up to her neck.

While Gawker.TV complained that "Katy Perry's Boobs Guest Star on Sesame Street," but it's hardly the first time breasts have ...

Subscribe to CT and get one year free
Tags:
Entertainment
Posted by:

Katy Perry Too Racy for Elmo? 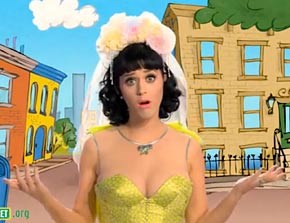 Katy Perry Too Racy for Elmo?
hide this