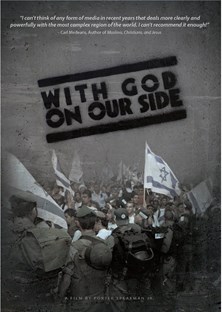 Editor's note: Several months ago, we reviewed a pair of documentaries about Christian Zionism. Our reviewer found one of the films, With God on Our Side, to be a balanced look at the situation. Guest blogger Gerald McDermott, the Jordan-Trexler Professor of Religion at Virginia's Roanoke College, offers a different viewpoint.

The documentary With God on Our Side is anything but balanced. It does not give "both sides their due" but instead interviews only Israelis on the far left and ignores Christian Zionists who defend the rights of Palestinians. The result is a one-sided attack on Israel that treats social and political realities with the same ideological insouciance which the documentary assigns to John Hagee and his band.

One interviewee in the film claims—without rebuttal—that Jews did not live in the land for two thousand years. The truth is that Jewish communities have lived in the land through all this time, flourishing in Jerusalem, Galilee and coastal cities in the 9th and 11th centuries, and then rebounding after being massacred by Crusaders in the 12th century. By the early 19th century, long before the rise of Zionism, more than ten thousand Jews lived in what is now Israel.

Viewers are told of Jews expelling Arabs from villages in the 1948 war for independence, but not that the war was started by Arabs, or that Arab armies from neighboring countries targeted Jewish civilians, or that the war was unnecessary because the UN had offered a two-state partition that the Jews accepted and Palestinians rejected.

The documentary states that Israel started the 1967 war "pre-emptively" but fails to provide the context: after months of threatening war against Israel, Egypt's President Nasser announced (just days before Israel struck) that "the armies of Egypt, Jordan, Syria and Lebanon . . . are arranged for battle, the critical hour has arrived."

The film then proceeds to charge Israel with "illegal occupation" of the West Bank after the 1967 War on the grounds that Israel failed to comply with UN Resolution 242.

According to this resolution, Israeli withdrawal was to take place in the context of mutual recognition of the right to exist and territorial adjustments to achieve secure boundaries. Withdrawal was ordered from "territories," not "the territories." Both Arthur Goldberg and Lord Carrington, the primary authors of this resolution, have said that the word "the" was purposely omitted because it was not intended for Israel to give back all of her territories, since they recognized that some were needed for secure boundaries.

Despite the fact that most Arab states have refused to recognize Israel's right to exist (a condition of Resolution 242), Israel has implemented the principles of the Resolution three times. When Egypt terminated its claims of belligerency in 1979, Israel returned the Sinai. When Jordan signed a peace agreement, Israel returned land claimed by Jordan. Then in September 2005 Israel unilaterally withdrew from Gaza, only to be met with new attacks on her civilians launched from that territory.

Illegal occupation? Hardly. Israel has made repeated efforts to comply with UN stipulations for the territories, while its Arab neighbors have not.

When the Palestinians appeared to accept Israel's right to exist during the Oslo negotiations, Israel turned over control of major West Bank cities to the Palestinian Authority (PA). But when the PA showed support for terrorist attacks on Israeli citizens in 2000, Israel resumed control of those cities. In that same year Israel offered to return 92 percent of the West Bank, which this documentary dismisses as ungenerous because, it charges, Israel never owned the land in the first place.

Yet Jews have lived in ancient Samaria (the West Bank) for over three thousand years. Jordan unilaterally renounced all claims to this area in 1988 and released legal ownership to Israel at that time. This video suggests Jews should remove all settlements from the West Bank, leaving it entirely for Palestinians. That would be as unreasonable as insisting that no Arabs can live in Judaea.

Besides, what other country has been required to give up land that it won in a defensive war? Do Germans displaced from Koenigsberg clamor and agitate for that German city to be returned to them by the victorious Russians?

The film concentrates attention on suffering caused Palestinians by the new wall. The wall is indeed tragic in many ways. But there is only a passing reference to the attacks on citizens which prompted its building, and the fact that this wall has prevented many such attacks.

Perhaps most disturbing, this video leaves unchallenged one man's denunciation of Israel as "apartheid on steroids." This accusation is not only inflammatory but egregiously unfair. South African apartheid was based on race. "Blacks" and "coloureds" could not vote and had no representation in the South African parliament. But Israeli citizens of all races—Arabs and Jews alike—can vote, be represented in the Knesset, and have recourse to the courts.

Apartheid was also a legal system that restricted participation to a minority that had control over a majority. In Israel the majority give equal legal rights and protection to Arab citizens, who make up 20% of the population of Israel.

Irshad Manji, a Muslim, has written, "At only 20 percent of the population, would Arabs even be eligible for election if they squirmed under the thumb of apartheid? Would an apartheid state extend voting rights to women and the poor in local elections, which Israel did for the first time in the history of Palestinian Arabs?"

There are also theological problems with this film. First, we are shown only Christian Zionists who use biblical prooftexts to support Israel's rights to the land. There is no sign of the vast numbers of Israelis and evangelicals who believe that modern Israel is a miraculous work of God fulfilling biblical prophecy while at the same time supporting Palestinians' rights to self-determination in the land. In other words, viewers never hear of another kind of Jewish and Christian theological Zionism that takes seriously both prophecies of Israel's return and the biblical mandate of social justice for Jews and Arabs alike.

The second and more serious theological problem is that the end of the documentary suggests that God's covenant with the Jews (Gen. 12.1-3 et al) was eclipsed by the new covenant for Christians. This is the familiar replacement theology that does not do justice to Rom 11.28-29, and that helped create an atmosphere that required Zionism in the first place. In other words, it was this sort of supersessionism (the belief that the Christian covenant replaced the Jewish covenant) that taught Christians for millennia that Judaism was no longer significant theologically, which then encouraged the belief that Jews were no longer important in a Christian world.