Christianity Today recently published a cover story on Focus on the Family's shift away from politics back towards an emphasis on the family. Backlash, surprisingly, has come from a brief mention towards the end of the piece about its budding relationship with TOMS shoes, a company that donates shoes to children for every pair sold. After receiving criticism for partnering with Focus, founder Blake Mycoskie posted on his blog that "TOMS, and I as the founder, are passionate believers in equal human and civil rights for all." 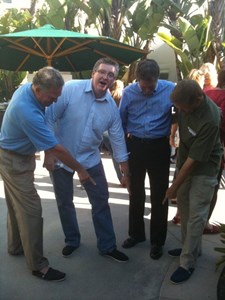 Mycoskie partnered with Focus on the Family for a "Style Your Sole" event with about 500 people on June 30. Esther Fleece, who heads the organization's millennial outreach and gave CT permission to post the picture to the right, noted Focus's former dress code when she posted the picture on Facebook: "From panty hose and ties to staff in TOMS." Focus President Jim Daly is second to the left.

The partnership between Focus and TOMS prompted sites like Jezebel to question whether TOMS should partner with an "anti-gay, anti-choice group?" Ms. Magazine started a petition on Change.org that has received about 500 signatures, asking TOMS to drop its relationship with Focus.

Here's what Mycoskie posted on his blog:

Had I known the full extent of Focus on the Family's beliefs, I would not have accepted the invitation to speak at their event. It was an oversight on my part and the company's part and one we regret. In the last 18 months we have presented at over 70 different engagements and we do our best to make sure we choose our engagements wisely, on this one we chose poorly.

Furthermore, contrary to what has been reported, Focus on the Family is not a TOMS giving partner.

So there is no misunderstanding created by this mistake, let me clearly state that both TOMS, and I as the founder, are passionate believers in equal human and civil rights for all. That belief is a core value of the company and of which we are most proud.

To clarify, the CT report said that Focus is "working to become a TOMS international distributor in Africa," not that it was already a distributor. Here's the full context:

As this issue of Christianity Today goes to press, the ministry is scheduled to highlight the work of Blake Mycoskie, the founder of TOMS, a company that donates shoes to an impoverished child for every pair sold.

"A year ago, they were like, 'Who's that?'," Fleece laughs. Now the company is working to become a TOMS international distributor in Africa. "We're making slow strides here."

Mycoskie has been attending Mosaic Church in Los Angeles, led by Erwin McManus, according to a piece earlier this year from John Brown University's newspaper. In his TOMS role, he has partnered with other Christian organizations in the past. He recently did an interview with Catalyst's Brad Lomenick and will be a speaker at the October conference. He has also been a speaker for Willow Creek's Global Leadership Summit. In his MySpace bio, his favorite books include the Bible, John Eldredge's Wild at Heart, and C.S. Lewis's Mere Christianity.

CT included a section on Mycoskie in a feature on "The Foot-Washers in Ethiopia" in the May issue.

The next chapter of the story introduces Blake Mycoskie, a young entrepreneur from Texas who started a number of successful small companies and, with his sister, competed on the reality television show The Amazing Race.

In 2006, Mycoskie vacationed in Argentina. While admiring a local style of footwear he thought could be adapted to American tastes, he noticed poor children running around barefoot. As a Christian businessman, his compassion kicked in, and a business model emerged.

TOMS Shoes was launched with the promise that for every pair of shoes sold, another pair will be given to an impoverished child. The idea was an immediate hit.

Nowhere is the model more appealing than in Ethiopia, where a pair of shoes can change a life. After visiting Dembi Dollo, Mycoskie called Thomas. "I thought, if we all worked collaboratively, we could make a big difference," says Thomas. "There's so much yet to be done. How many times in this era do you have a chance to be a pioneer?"

TOMS targets its shoe distribution to the children of podo patients, who are five times more likely than the general population to get podo. Through Mossy Foot alone, TOMS distributes 10,000 pairs of shoes a month.

Some podo activists express some nervousness about TOMS. They give TOMS high marks for its willingness to flex and learn, but can't forget that TOMS is a for-profit company. TOMS brings resources that outstrip what small foundations, churches, and individual contributors can do. Some, like Thomas, are nervous that the charitable impulse might give way to the profit motive down the road.