A new ABC-Washington Post poll finds that, for the first time, a majority of Americans now believe that same-sex marriages should be legal. The poll finds 53 percent think "it should be legal for gay and lesbian couples to get married." About 45 percent said it should be illegal. 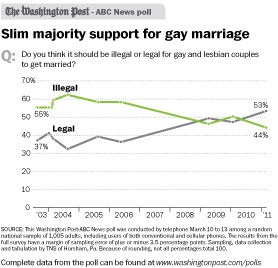 The survey also finds that most Americans hold strong views on the issue. Just over a third—36 percent—feel strongly that same-sex marriage should be legal, while 35 percent strongly think that it should be illegal. As late as 2006, a majority strongly opposed it.

The survey's results reflect findings by other surveys that find increasing support for allowing gay marriage. Last year's surveys by Pew Research Center for the People and the Press (Pew) found, that for the first time, less than 50 percent of Americans oppose gay marriage. Only 48 percent oppose "allowing gays and lesbians to marry legally." However, only 42 percent favor gay marriage in the Pew polls.

National Association of Evangelicals (NAE) president Leith Anderson is one of several evangelical leaders who are lobbying Congress to defend the Defense of Marriage Act (DOMA) in court. In February, the Obama administration informed Congress that it would no longer defend the constitutionality of DOMA in some federal lawsuits.

Anderson said that the NAE disagreed with Obama's decision. "We hope that Congress will hire its own lawyers to vigorously defend DOMA in federal courts," said Anderson. "Marriage is foundational to a healthy society in which children enjoy the care and nurture of both their mother and father. Radically redefining marriage will have a far-reaching impact on the health of our nation."

Last week, the leaders in the House of Representatives decided to defend DOMA in court. Speaker John Boehner (R-Ohio) said, "The constitutionality of this law should be determined by the courts—not by the president unilaterally—and this action by the House will ensure the matter is addressed in a manner consistent with our Constitution."

"We thank Speaker Boehner for working to protect the rule of law and the institution of marriage," said Perkins. "The Speaker is sending a bold message that Congress will not stand idly while the President picks and chooses which laws will be nullified by Executive Branch surrender to antagonistic litigants."

In general, the administration defends U.S. law even when it goes against White House policy positions. However, presidents are not bound to defend laws that it determines are violations of the U.S. Constitution. Though extremely rare, previous presidents have also chosen to not defend a law.

Indeed, conservatives have noted that federal law includes a specific list of procedures that must be followed in such cases. In these rare cases where the president believes the law violates the constitution, the administration must notify the congress. Either chamber may choose to defend the law. In the Senate, this would require a resolution. The House does not vote on the decision. It is left to the Speaker, who acts in consultation with leaders from both political parties.

At issue, then, is whether the president's decision on DOMA is based on sincere constitutional objections or mere policy disagreements.

The Heritage Foundation's Hans A. von Spakovsky believes it is the latter.

"The president's decision seems driven by politics and violates his law enforcement duty, calling into question the integrity of our justice system," said Von Spakovsky. "It contravenes long-standing Justice Department policy to defend Acts of Congress unless no reasonable argument can be made in their defense or they infringe on core presidential constitutional authority, neither of which is the case with DOMA."

The administration's justification for its decision is complex. The decision applies only to cases of couples married under state law who are bringing suits in the U.S. Court of Appeals for the Second Circuit, which has jurisdiction over federal district courts in New York, Connecticut, and Vermont. In other circuit courts, there is precedent for reviewing DOMA under the "rational basis" test. This is a relatively low bar that gives deference to the Congress. The administration agrees that DOMA is constitutional under the rational basis test.

The president does not believe that the rational basis test, absent precedent, is constitutional. He believes that not recognizing state marriages demands "heightened scrutiny" and under this higher bar DOMA's definition of marriage would be unconstitutional. As a result, the administration will no longer defend the constitutionality of two cases in the Second Circuit. If the Second Circuit later decides that the rational basis rule applies, then the administration will comply and argue in favor of DOMA.