Evangelicals are the only religious tradition with more followers seeing Islam as violent than those who see it as not more violent.
Tobin Grant|March 10, 2011 01:24 PM

Rep. Peter King (R-NY), chair of the Homeland Security Committee, is making headlines for his hearings on the "extent of radicalization in the American Muslim community." King said that hearings will address both efforts by terrorists to recruit Americans and the reactions by Muslim leaders in the U.S. to these attempts to radicalize American Muslims.

"The danger comes from a small segment within the Muslim community," said King. "Unfortunately, the issue we are facing is that not enough leaders in the community are willing to come forward when they know an individual is being radicalized. In some cases, these leaders have encouraged individuals to not cooperate with investigations."

David Gushee of the New Evangelical Partnership for the Common Good is one of several evangelicals who have criticized the hearings.

"It is always a very dangerous thing when one group is singled out in front of the rest. It is humiliating, shaming and stigmatizing, and almost invites average citizens to marginalize ... 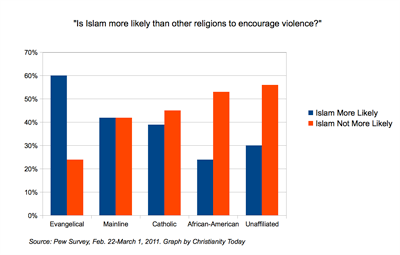