From media mavens to grassroots activists, conservative Christian leaders are heaping praise on presidential candidate Rick Perry, an early but important show of support from a vital GOP constituency.

Initially unimpressed with the 2012 presidential field, some of these evangelicals now herald Perry's late entry as the second coming of Ronald Reagan. 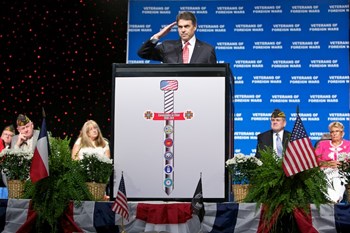 Like Reagan, they say, Perry is a big-state governor, a staunch conservative and, significantly, a fellow Christian.

Perry, in turn, has suffused his campaign with religion, building on strategies honed for years in Texas politics.

He has huddled with social conservatives at a Texas retreat, hosted a high-profile Christian prayer rally in Houston and recited his prodigal-son spiritual testimony at the late Jerry Falwell's Liberty University.

On Tuesday (Sept. 20), Perry said his Christian faith includes a "clear directive" to support Israel, a view shared by many evangelicals, who believe God gave the land to the Jewish people.

– Donald E. Wildmon, founder and former head of the American Family Association, is endorsing Perry. The Mississippi-based AFA organized and spent $600,000 to finance Perry's prayer rally, called "The Response," and later directed its 30,000 participants to a new Christian

"I think the overwhelming majority of what's often called the `religious right' will support the governor," said Wildmon, whose organization boasts a mailing list of 60,000 pastors and operates 180 radio stations. "I'm going to do whatever I can to help the man get

– Former Focus on the Family head James Dobson has gushed over Perry on his new radio show, calling him a "deeply committed Christian" and a courageous leader. Dobson was a co-organizer of The Response and will reportedly appear with Perry at an event in Orlando next month.

– Liberty University Chancellor Jerry Falwell Jr. has mused that Perry could be another Reagan and called him "one of the most pro-life governors in American history." Falwell also said he admires the governor's "guts" for suggesting that Texas could secede from the union.

– Evangelical historian and activist David Barton, a longtime Perry ally, has circulated a 14-point defense of the governor's record on economic, social and immigration issues.

– Southern Baptist leader Richard Land has penned an op-ed that portrays Perry as shrewd, deeply conservative and a lifelong evangelical of "genuine" faith. (Perry's account differs slightly. He says spiritually lost as young man before turning to God at age 27.)

– Grassroots activist David Lane, who organized "pastor policy briefings" featuring Perry during his 2006 campaign for governor, is reportedly planning similar events in battleground states, including one in Florida next month. Lane was finance chairman of "The Response."

"I'd be very surprised if the emergence of David Lane's projects in several states was about anything other than supporting Gov. Perry," said Kathy Miller, president of the Texas Freedom Network, a watchdog group that has monitored Perry's ties to conservatives for years.

In addition, Perry has been invited to appear with Dobson and Barton at a Nov. 12 event called "One Nation Under God" that aims to teach Christians to see "history and current events in light of God's Word, and how to take action that aligns with his truth."

The conservative Christian movement is less top-down than many in the media suspect, said John C. Green, an expert on religion and politics at the University of Akron in Ohio. But grassroots activists take note when evangelical eminences like Dobson praise a particular

"Lots of conservative Christians still take cues from these individuals," Green said. If they unite behind a candidate, evangelicals can have a huge electoral impact, especially in key states like Iowa and South Carolina, where they constitute nearly half of all GOP voters, said Green.

Perry's very public "I once was lost, but now I'm found" spiritual speech at Liberty University last week got the media's attention, but it was his confab at a secluded Texas ranch in August that impressed the religious right heavyweights, said Land.

More than 200 social conservatives were there – from black Pentecostals to conservative Catholics to Latino evangelicals, according to Land, president of the Southern Baptist Convention's Ethics and Religious Liberty Commission.

"The general feeling people came away with is that this guy is the real deal," said Land, who attended. "I don't see how the meeting could have gone any better for Perry."

Mark DeMoss, who heads a Christian public relations agency and advises Mitt Romney's rival campaign, said he is not surprised that many evangelical leaders back Perry.

"A significant number of evangelicals have always wanted above anything else in their candidate, someone who shares their Christian faith and theology, and apparently Gov. Perry does," DeMoss said.

However, DeMoss added, it is too early in the campaign to declare Perry the GOP's Chosen One.

"Gov. Perry is only just beginning to be vetted on the national stage," DeMoss said. "The dynamics are changing almost weekly."