"On the course and off the course, the Bible group is the invisible club in the bag," CNN reports. "Some members pause midway through their rounds to read from the New Testament, meditate on holy scriptures and, of course, pray."

Webb Simpson, who won today's U.S. Open golf tournament, might be the newest member of the "holy hall of fame." His Twitter bio describes him as a "*sinner* loved by a Savior." 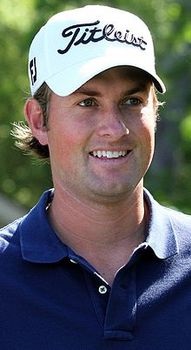 Simpson, who trailed by four entering the final day, finished at 1-over-par 281 to beat Michael Thompson and Graeme McDowell by one stroke. He studied religion at Wake Forest University and has hosted a Youth for Christ Challenge golf tournament.

"It was a cool day. I had a peace all day," Simpson told reporters. "I probably prayed more on the last three holes than I've ever done in my life, and that kept me calm and got me home in 2 under."

He won his first PGA Tour victory at the Wyndham Championship last August.

"I'd be stupid not to thank my Lord and Savior, Jesus Christ, because it was tough out there and I was nervous, and I felt his presence all day," he told CBN.

In an interview with Beliefnet's Chad Bonham, Simpson described how faith directly plays into golf ethics.

Our deposit of the Holy Spirit living inside of us, more than anything, has allowed me to make those tough decisions. It's happened probably 10 times in my life where I had to make certain calls and call penalty shots on myself. For me, it's not as much the nature of the game but the fact that the Holy Spirit is prompting me to call a penalty on myself. Within our own nature, we don't want to call a penalty on ourselves. We want to see how much we can get away with. That's been a part of every tough decision I've made in golf.