The ICC has charged Kony, Bashir, Lubanga, and others for crimes against humanity. Boko Haram may be next.
World Watch Monitor|August 8, 2013 10:49 AM 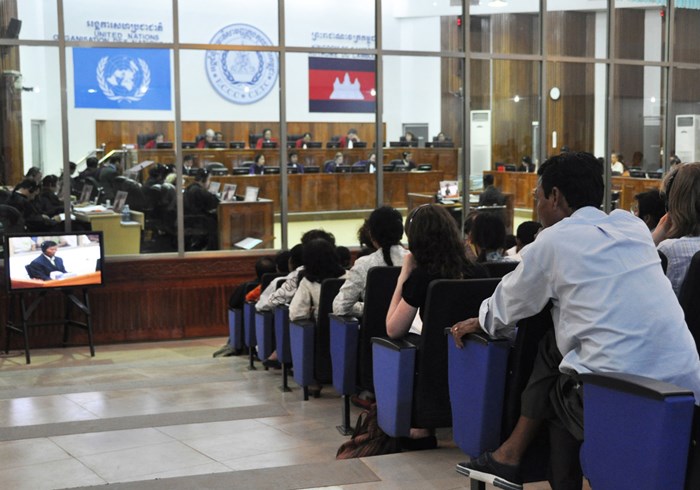 Image: Courtesy of Extraordinary Chambers in the Courts of Cambodia
ICC investigates crimes against humanity in Cambodia.

(WWM) Trying a new tactic against persistent persecution, Christian leaders in Nigeria have sought to press charges against Boko Haram before one of the world's top courts. This week, the strategy seems to have succeeded.

The International Criminal Court (ICC) is now investigating the militant Islamist sect for "crimes against humanity." Chief prosecutor Fatou Bensouda said the group's "widespread and systematic attacks" have killed more than 1,200 people in northern Nigeria since 2009.

The preliminary ICC report is based on statistics leading up to December 2012. The ICC is now considering whether it merits further investigation.

The ICC, based in The Hague, tries cases of crimes against humanity, war crimes, and genocide when a country's own courts fail to prosecute. Nigeria agreed in 2001 to subject itself to the jurisdiction of the ICC.

Pastor Ayo Oritsejafor, president of the Christian Association of Nigeria (CAN), agreed that the rate of attacks is intensifying.

"In my first term, about 3000 Christians were killed. Last year alone averaged over 100 every month," he said in a recent speech. "In 2012, about 70 per cent of all Christians killed worldwide were in northern Nigeria alone."

Oritsejafor added that he doubted Boko Haram were ready for constructive dialogue and called upon Nigeria's Islamic leaders to condemn recent attacks and redress misinterpretations of the Qu'ran.

Boko Haram, which among other demands wants the imposition of Shari'ah law in Nigeria, has claimed responsibility for many of the attacks across the country.

Despite the imposition of a curfew and a declaration of a "state of emergency" by the federal government in affected states, Boko Haram and affiliated terrorist groups have continued their attacks, especially in the northeastern states of Borno, Yobe, and Kano.

Boko Haram has also rejected a proposed ceasefire by the Nigerian government. Bensouda said the ICC is considering whether the government has done enough to prevent the attacks and to bring the perpetrators to justice.

Additionally, some of Borno's youths have joined together to form a vigilante group to thwart attacks, while the establishment of a similar group has been proposed in Kano state, in Nigeria's north.

Tobias Idika, president of community group Ohanaeze Ndi-Igbo in Kano, told World Watch Monitor a vigilante group would guard areas especially likely to be targeted by terrorists, such as public spaces and places of worship.

"We are fine-tuning the arrangement and reaching out to all stakeholders and the government to stop the endless blood-letting," he said. "The vigilante will include professionals and will work with other security agents. Our goal is to protect the people within the ambit of the law," Idiaka said.

He said the vigilante group would work in conjunction with the police, carrying weapons approved by the police and providing them with intelligence.

The intervention of the Borno Vigilance Youth Group, which carries sticks and knives but not guns, in preventing attacks by Boko Haram has been hailed by both the state government and tribal leaders.

Bishop Ransom Bello, chairman of the Kano chapter of CAN, also said the formation of the community vigilante group will be a positive development, but with some reservations.

"What we are against is arming them with guns and ammunition," Bello said. "As Christians, we don't believe in retaliatory attacks or any form of violence. The truth is that what we have is not a case of the Muslims fighting Christians. It is an Islamic group that is fighting everybody. We are doing our best to educate the people to be vigilant, keep praying and be patient as we all collaborate to ward off the attackers."

Editor's note: CT reported when Boko Haram targeted the Sabon Gari neighborhood in July and March, killing dozens of people and adding to previous attacks on an elite military church and at Mubi Polytechnic University. Even more recently, CT noted the Nigerian government's report that Boko Haram has killed even more Muslims than Christians in a campaign of violence that has combined civil conflict with high rates of Christian persecution.