America's largest Protestant denomination released its annual self-assessment today, and most of its metrics went in one direction: down.

In short, the nearly 16-million-member Southern Baptist Convention (SBC) gained 270 churches over the past year, but lost more than 105,000 members and 188,000 Sunday worshipers, according to its Annual Church Profile. This marks its sixth straight year of membership decline.

Arguably the most important metric to Southern Baptists is baptisms. Last year saw the second-worst total in 60 years. This year, LifeWay Christian Resources (which compiles the data) notes:

Although baptisms were a bright spot in last year's report, increasing 0.7 percent, this year's report shows a decline of 5.5 percent to 314,956 people. Reported baptisms have declined six of the last eight years with 2012 the lowest since 1948. The ratio of baptisms to total members increased to one baptism for every fifty members.

"While we celebrate every new baptized believer represented by these numbers, fewer reported baptisms is heartbreaking," said Thom S. Rainer, president and CEO of LifeWay. "Southern Baptists cannot rest on what God accomplished through us in prior years."

The self-described reaction of Frank Page, president of the SBC's executive committee: "God forgive us and God help us."

However, giving to international missions was the third-highest total ever.

For those who like to crunch numbers, here is the state-by-state breakdown: 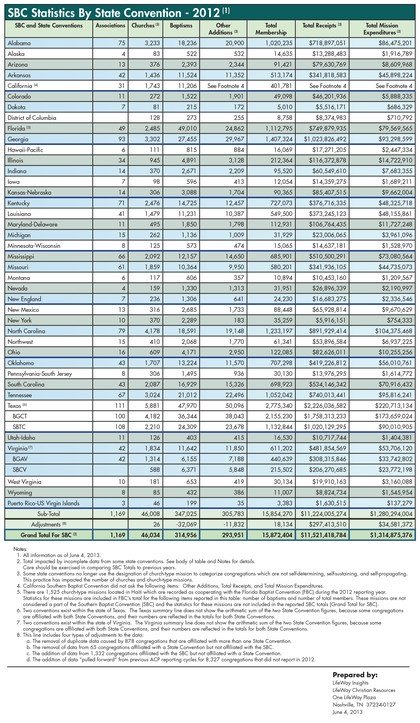