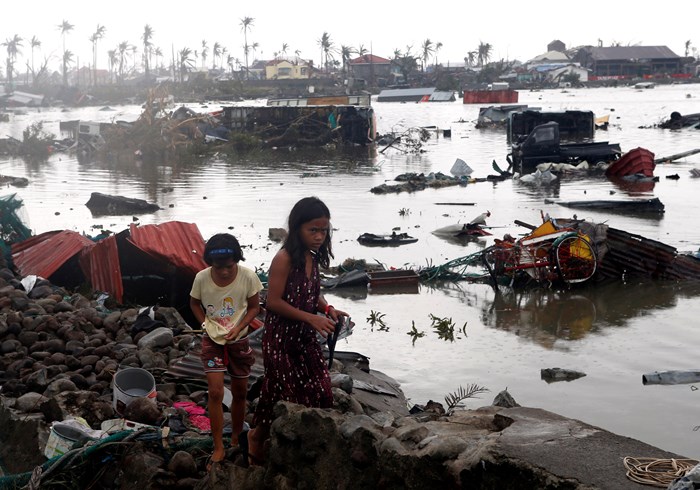 After abandoning her van and walking for eight hours "over electrical posts and passing by dead people along the way," Mary Ann Zamora finally arrived in Tacloban, one of the Philippine cities worst hit by Typhoon Haiyan (Yolanda), one of the world's strongest storms on record.

"The way we took last night looks like an endless path of misery. There are survivors approaching me, all are in tears, to ask for favors to send SMS for their worried relatives," emailed Zamora, an emergency communications worker for World Vision, to CT from Tacloban, the highly urbanized capital of the province of Leyte (approximately 360 miles southeast of Manila).

Christian relief agencies, especially ones in Asia, were mobilizing teams to provide shelter, food, and medical care. Philippine officials say they expect the death toll to be as high as 10,000 in Tacloban alone. Air transports are bringing in blankets, plastic sheeting for shelters.

"It's normal to see people tired and hungry here," Zamora said via email, " but what struck me is when I saw one man sobbing, making use of his bag as his pillow and falling debris as his blanket. He sobs of out misery. 'I've been everywhere to look for my two children, my wife and my mother, but I can't find them,' he told me. He lives near the seawall and his house was washed out by the strong winds and heavy downpour of the typhoon."

According to World Vision:

"Every minute counts in this response," said Josaias Dela Cruz, World Vision's National Director in the Philippines. "With the death toll rising and the extent of the damage still not fully known, we are doing everything we can to scale up as quickly as possible." The Government of the Philippines estimates that at least 4 million people have been affected by the typhoon.

Denominational relief groups are also mobilizing. The Lutheran Church-Missouri Synod has already pledged $100,000. An assessment team is in transit to the disaster area.

"After hearing of the largest typhoon in recorded history and a report from the president of our partner, the Lutheran Church of the Philippinnes (LCP), that at least three congregations as well as the homes of pastors and church members would need to be rebuilt, the LCMS is engaging its mercy response to find the best way to assist," said the Rev. Dr. Matthew C. Harrison, president of the LCMS. "These funds will provide some immediate relief, and I am deeply grateful to our generous donors for making this grant possible."

CT editorial staff will update this report as events unfold.

According to the Philippine Council of Evangelical Churches concerning the worst-hit areas in the Visayas region:

"1. Over 2 million families or 9.7 million persons were affected by the disaster.

2. Some villages in Tacloban City and Samar were completely wiped out. Storm surges of up to 15 feet reached even those inside evacuation centers. Entire houses were destroyed, leaving the survivors with barely anything left.

3. Rows of bodies had been lined up on the streets as the death toll escalated to 1700, as of this writing.

5. Survivors are in dire need of food, water, shelter and clothing.

6. Body bags are also needed for storing the dead.

7. Families have been sleeping on the streets.

Evangelical churches have been mobilizing their members either to donate in cash or in kind. Some of them are also doing relief efforts themselves, like Victory Christian Fellowship and Church of the Nazarene.

Our relief arm, the Philippine Relief and Development Center, is coordinating with organizations like Samaritan's Purse and Habitat for Humanity in delivering relief goods and providing Shelter Repair Kits."

According to Paul Varberg, a missionary in the Philippines:

"I have lived in the Philippines for many years and I have experience four Super Typhoons and dozens of typical typhoons in the past that have caused great destruction but those storms were nothing like Typhoon Yolanda which hit Tacloban City a few days ago. Hundreds of electric posts are down so we will not have power for maybe a month or more, all cell towers in our area of Leyte are also damaged so we do not have cell phone coverage and we do not have email. I am sending this one email through a government relief service. Please forward this to others who know of our ministry because I was not allowed to send this to too many people.

All staff and families of Bethel staff are fine, but they all experienced the storm of their lives. I was supposed to leave for mission meetings the day before the storm but I decided to just let Margie go on our behalf and I stayed to look after the school through the storm. So Margie and Vicki were not with me in Tacloban during the storm. Margie was in Cebu City and Vicki was in Manila at Faith Academy...

When the storm started at 6 a.m. I gathered the two American volunteer teachers and the two Chinese teachers and we positioned ourselves in front of the big window in the attic and in our bedrooms because, as usual in Super Typhoons, the wind can blow water around the edges of the glass. But after about thirty minutes of mopping up water leakage the storm ramped up to the next level. The windows the second floor were blown in and shattered. Fortunately, my back was to the window when that happened and God protected me for the glass missiles that were blasted across the room, other than a few small cuts on my head and legs I am OK. The girls came screaming down from the attic because they said the roof is lifting. Sure enough it was blown off piece by piece until very little remained. We then sought refuge in first floor bathrooms.

Later when the wind shifted to the other side of the house, I went into our room to try and rescue my camera, laptop, and hard drives, I found that half of our king size bed was broken and thrown out the window. Margie's desk is gone, too. I have only found a few pieces of it. Pictures from our many photo albums were either floating or plastered to the wall...

Even though the storm arrived at low tide, the storm surge in downtown Tacloban raised the sea level above the roof of the MacDonald's restaurant. Many died and food and other goods on the first floor of downtown stores was flooded.

Please pray for us that we will adjust to life without electricity, limited water, and almost no communication. For the school to continue God will need to supply funds to repair the buildings and to replace a lot of books, projectors, microphones, sounds systems, computers, furniture and other things that were damaged. Pray that donations will come in soon so that we will be able to operate the school by January.