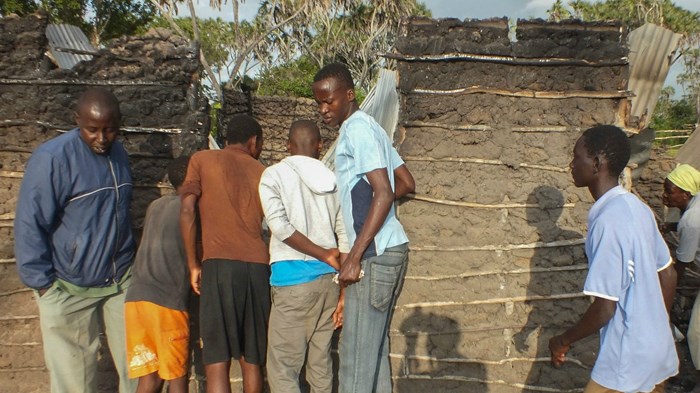 Image: STR/EPA
A torched house in Hindi, a village in eastern Kenya

Attacks on Kenya's coastal region over the early summer left nearly 100 people dead amid concerns over a rash of religious violence.

Over the weekend, at least 22 people died in Saturday night attacks on the villages of Hindi and Gamba in eastern Kenya, reportsThe Wall Street Journal. A spokesman for the terrorist organization al-Shabaab claimed responsibility for those attacks, as well as attacks in mid-June that left an estimated 63, mostly Christians, dead.

(Kenyan president Uhuru Kenyatta instead blamed local political networks, which are often divided along ethnic lines, and the BBC noted that earlier attacks did not follow typical al-Shabaab patterns.)

Witnesses said gunmen targeted Christian men in this weekend's attacks. A blackboard on a road read, "Kick Christians out of coast," and criticized former Kenyan prime minister Raila Odinga, according to The New York Times. The London Times reports that leaflets threatening Christians with death have been scattered around a beach resort in the area.

On Monday night, militants torched Covenant Church just north of Hindi, as well as a Catholic church in Gamba. Two Christians were killed in those attacks, reports Morning Star News (MSN). During the weekend attacks in the two predominantly Christian villages, witnesses told MSN that the attackers demanded that non-Muslims leave the area.

Gunmen also freed at least one suspect, who had been taken prisoner after al-Shabaab's previous attacks two weeks ago, from a police station, according to the BBC. Witnesses said the gunmen freed three other prisoners who were Muslim, but shot the other five who would not say the Islamic creed, according to MSN.

In mid-June, militants attacked the coastal town of Mpeketoni, killing at least 48 during a five-hour rampage. A local police commissioner told the BBC that about 50 attackers drove into town flying the Shabaab flag and shouting "Allahu Akbar," an Arabic phrase meaning "God is great."

In Mpeketoni, residents described assailants asking whether residents were Muslim or spoke Somali.

"They came to our house at around 8pm and asked us in Swahili whether we were Muslims," the BBC quotes Mpeketoni resident Anne Gathigi saying. "My husband told them we were Christians and they shot him in the head and chest."

Morning Star News reports that Mpeketoni is only 5 percent Muslim and most of those killed were Christians.

A few days after the Mpeketoni attack, 15 were killed and 12 women abducted from the nearby village of Poromoko, where armed men went door to door hours before dawn, ordered people outside, and made them recite the Islamic creed, Reuters reported.

Al-Shabaab, a militant Somali Islamic group the U.S. government has labeled a terrorist organization, claimed responsibility for the attacks and said in a statement that it was revenge for the "Kenyan government's brutal oppression of Muslims in Kenya through coercion, intimidation and extrajudicial killings of Muslim scholars," the East African Standard reported. The group claimed it targeted Mpektoni because it was an originally Muslim area that was "invaded and occupied" by Christian settlers, Al Jazeera reported.

Al-Shabaab also condemned the "Kenyan military's continued invasion and occupation of our Muslim lands and the massacre of innocent Muslims in Somalia."

The June attacks were collectively the deadliest Kenya has seen since at least 67 people were killed in a four-day shooting spree at Westgate Mall in Nairobi last September. Four people were charged with involvement in that attack, which al-Shabaab claimed it orchestrated.

On March 23, gunmen entered a Sunday morning worship service in Mombasa County and sprayed the congregation with bullets, killing at least seven Christians and leaving several others in critical condition. Two heavily-armed men wounded more than a dozen of the 200-member Joy in Jesus Church in the Likoni area of Mombasa, where a mosque said to have ties with the Somali Islamic extremist group Al Shabaab has caused tensions.

The spate of recent attacks along Kenya's border spark comparisons to Nigeria, where Boko Haram has grown increasingly active. Operatives recently orchestrated the high-profile kidnappings of 276 girls from a school in the northern town of Chibok in April and 20 more from a nearby town in June.

However, al-Shabaab and Boko Haram have so far claimed different motivations for their attacks. While Boko Haram is opposed to Western education and religion, al-Shabaab wants Kenya to pull its troops out of Somalia, where they have been pursuing the terrorists, The Economist explained in 2012:

[Kenya,] East Africa's biggest economy[,] is unlikely to witness the intercommunal violence exploited by Nigerian militants. Kenya's northeastern province is not religiously divided in the manner of Nigeria's "middle band." Boko Haram is trying to incite violence between Muslims and Christians. The Shabaab—suspected of carrying out the latest killings—are trying to get Kenya's security services to turn on their own population.

However, recent updates indicate that the two groups may share tactical information with each other, and both are linked to al-Qaeda.

Boko Haram is a Hausa phrase that roughly translates to "Western education is forbidden." The group has killed thousands, primarily in northeastern Nigeria, and launched military operations in 2009 to form an Islamic state, the BBC reports. CT reported on the group's tremendous increase in activity over the past year.

Al-Shabaab said it would continue its campaign in Kenya.

CT has reported on Kenya, including previous al-Shabaab attacks in the country.