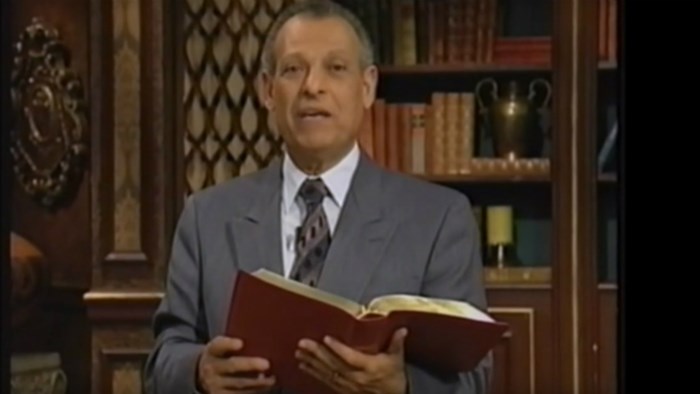 Menes Abdul Noor, who served as pastor of Kasr el-Dobara Evangelical Church in Cairo, Egypt, for over three decades, died on Monday, September 14, from Parkinson’s disease. He was 85.

Under his leadership, the 8,000-plus Presbyterian congregation became the largest Protestant church in the Middle East.

Abdul Noor authored and translated over 100 books, and taught at the Haggai Institute and Evangelical Theological Seminary in Cairo for more than 25 years. He is survived by his wife, Nadia, his son Farid, and his daughter Violet. He had six grandchildren and four great grandchildren.

His memorial service Wednesday was attended by officials of the Orthodox, Catholic, and Anglican churches, as well as a representative of Al-Azhar, the foremost Muslim institution in the Sunni world. It was also broadcast live on the SAT-7 Arabic satellite television network.

Kasr el-Dobara is located in the government sector of Cairo near Tahrir Square. During the 2011 Egyptian revolution, the church opened its doors to care for injured protestors and others needing shelter. Over the years, the church has hosted evangelists Billy Graham (audio), Luis Palau, and Reinhard Bonnke.

In a warm tribute, Len Rodgers, director emeritus of Evangelicals for Middle East Understanding, wrote, “Menes was my pastor. The church grew and continues to grow because of his leadership and vision. Egypt has lost a great treasure.”

Abdul Noor’s grandfather and father were also pastors in the Presbyterian Church. But over the course of his life, he broke new ground in holistic ministry, outreach, and leadership development.

“He was a renowned evangelist who could reach all levels of society,” said Atef Samy, Abdul Noor’s assistant pastor since 1991 and currently director of outreach ministries for the church. “He could challenge the intellectual while being approachable by the simple.”

Samy lauded Abdul Noor as one of the first pastors willing to minister to people of all religious backgrounds. And he poured himself into his pastoral team, giving each one room to grow and develop the church beyond what he could do alone.

“He empowered us while he was still at his own personal best,” said Samy. “This does not happen in the Middle East.”

In an unpublished interview with CT in January 2008 in Cairo, Abdul Noor shared some of his life story. As a teen-ager, he dreamed of a career as a scientist.

But at his boarding school in Upper Egypt on Sunday, December 16, 1945, he was attending a soccer game, when he heard a call to ministry:

“I heard a voice calling me by my name. You be a minister, a pastor. I didn’t hear the voice inside my ears. It was from outside. I looked around. Nobody was there. I heard the voice. I hated it. It was breaking my dreams for science.

“I heard this for the second time. At the corner I, heard it for the third time. Now I knew that God was talking. I was brokenhearted. I knelt down. I said, ‘God, you are calling me to be a minister. I do not like it. But if I disobey you I will be a sad person. I will never succeed in life because I’m against your way. I will say yes, and you give me joy.’ ”

He informed the school’s chaplain and they agreed he would finish his science studies and then enroll in seminary.

After graduating, Abdul Noor took a pastorate in a village in Upper Egypt. While there, he began a public literacy campaign, using the “each one, teach one” method of the late missionary Frank Laubach, known at the time as “apostle to the illiterates.” Laubach visited Abdul Noor’s program, which Reader’s Digest wrote about in 1954.

Later in the 1950s, Abdul Noor traveled to the United States, receiving a master’s degree from the Biblical Seminary of New York (now New York Theological Seminary). He also studied journalism and editing at the School of Journalism, Syracuse University, since he had taken on editing and writing roles for Christian publications in Egypt.

In the 1960s, Abdul Noor worked as an editor, but later returned to the pastorate. In 1970, Abraham Sahid, the founder of Kasr el-Dobara, died. Six years later, the congregation hired Abdul Noor, known for his Bible-based preaching, as its senior pastor.

In 1977, Abdul Noor partnered with John Sagherian and started the Youth For Christ radio program, “Kalima Ma’ak” (A Word With You) in Arabic. These were weekly 15-minute programs broadcast by Trans World Radio in Monte Carlo and continued for 17 years.

His knowledge of Scripture, the Arabic language and Islam, his perfect radio voice, and his uncanny ability to pick up in mid-sentence during recording, made this a very successful program. In a few years, thousands of letters from listeners were coming to his church.

“We are in a public square and people flock in,” he said. “I feed the people the word of God. We have a building where pigeons come. If we want pigeons to come and stay, we give them wheat to eat. We give our people spiritual wheat to eat. I give the best, building my sermons on the Bible.”

Abdul Noor freely distributed Bibles in Cairo, including to Muslims. He said his witness to Muslims changed after a Muslim dentist had a vision and “came to Christ” with his family in the 1970s.

He said many Muslims have great respect for Jesus.

“The Qur’an says that Jesus chases out devils, Jesus heals, and the miracles of Christ open the eyes of those born blind,” he told CT. “I usually tell my Muslim friends, 'I’m open minded if you convince me. If I see that Islam is better than Christianity, I have no law of apostasy in Christianity and I want to listen.' ”

But he said the Bible itself does not needed defending, quoting the 19th-century theologian Charles Spurgeon: “The Word of God can take care of itself, and will do so if we preach it, and cease defending it. See that lion. They have caged him for his preservation. . . . Open that door! Let the pure gospel go forth in all its lion-like majesty.”

In 2007, Abdul Noor retired and lived with his wife inside the church complex. He said his priority in retirement was training pastors to witness.

“I just want to make sure that ‘every learned scribe in the kingdom of God is like a head of the house, takes all the new things to feed his people’ (Matt. 13:52), and that he has the old and new experiences, Old and New Testaments, Holy Communion, and baptism.”