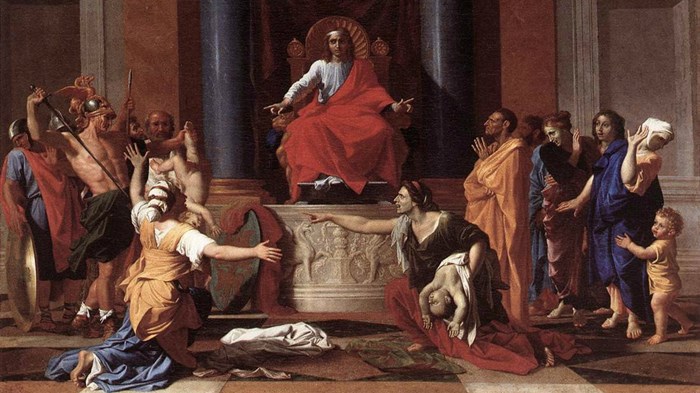 Image: Wikimedia
A 17th-century rendition of the Judgment of Solomon.

Distributing the royalties from religious television broadcasts is more complicated than two mothers arguing over their baby in Solomon’s court, a federal court ruled last month.

“King Solomon was not subject to the Administrative Procedure Act; the Royalty Judges are,” wrote judges on the D.C. Circuit Court of Appeals. “Congress thus required that the Royalty Judges’ determinations rest on a focused analysis of the record, not an arbitrary splitting of the baby.”

The dispute, between two groups of Christian television producers, stems back to the way Congress set up television broadcasting in order to protect “intellectual property while also ensuring the information flows freely,” the opinion said.

Cable or satellite television companies are allowed to rebroadcast any broadcast television show they want, without getting permission from the show’s owners. In return, they pay royalties to the federal government. The Copyright Royalty Board then splits the money—first into broad categories like music, sports, and devotional programming, and then among the claimants in each category.

The devotional programming category, with royalties from 2000-2003, is being contested by two consortiums. (In 2003, the amount of money set aside for devotional claimants was more than $350,000.)

Any organization that wants to receive royalty money must submit its rationale to the CRB as to how it thinks the pot of money in its category should be divided.

“At root, the dispute centers on the fact that the SDC wants to use a system based on Nielsen ratings,” Brian D. Boydston, IPG’s attorney, told CT. “We think a better methodology would be to look at subscribership.”

IPG figured its ministries should get between 37 percent and 53 percent of the royalties for each year from 2000 to 2003. SDC, on the other hand, didn’t believe IPG had a “valid compensable claim” and asked for more than 99 percent.

The royalty judges agreed in part. They ruled that IPG was only properly representing three of its seven claimants and dismissed three of them. The BGEA, though, was a trickier decision.

In 2005, the BGEA’s attorney wrote to IPG, terminating the agreement that IPG would file the BGEA’s claims with the royalty board for the years 2002 and 2003. “You and your company or affiliates are no longer authorized to claim to represent ... or to file any future claims for our organization in any domestic or international matters,” attorney Justin T. Arnot wrote.

(The year 2002 was a rough one for IPG: on November 14, principal Raul Galaz was sentenced to 18 months for claiming and receiving false royalties.)

But IPG told the BGEA it was “legally (and contractually) incapable of collecting [the royalties] itself” and that attempting to walk away was “a brazen breach of contract.”

The royalty board called IPG’s response “strong-arm tactics” and a “mischaracterization” of its rights to keep the BGEA in line. However, since the deadline for finding new representation (or representing itself) was past, the board allowed the BGEA to be represented by IPG.

The BGEA also submitted a letter to the court, confirming IPG’s representation.

After settling the proper representation, the royalty board couldn’t land on a way to divide the money.

Calling SDC’s viewership-based rationale too late to consider and IPG’s results “absurd,” the royalty judges split the difference between the two, assigning about 60 percent of the royalties to SDC and about 40 percent to IPG.

Heading to the D.C. circuit court is “not a common process,” SDC’s attorney Matthew J. MacLean told CT. But he challenged the royalty board's decision, and the appeals court agreed that it needed to be reconsidered, saying the royalty judgment was based on a “two wrongs make a right” methodology.

“Despite the Solomonic pedigree, the Royalty Judges’ approach was quintessentially arbitrary and capricious,” the judges wrote.

The D.C. circuit court remanded the case back to the royalty board for further consideration.

It might take a while. The royalty judges finally issued their distribution for the year 1999 in December of last year. Final score: SDC received 71.3 percent, and IPG received 28.7 percent.

CT's previous coverage of televangelism includes the troubles with TBN and the deaths of pioneers such as the Crystal Cathedral's Robert Schuller, TBN's Paul Crouch, and the "original televangelist"—Oral Roberts.