Christian Women Worldwide Are The Most Religious … and the Most Persecuted

Thousands of US churches urged to ‘stand with the persecuted’ this Sunday.
Sarah Eekhoff Zylstra|April 15, 2016 01:27 PM 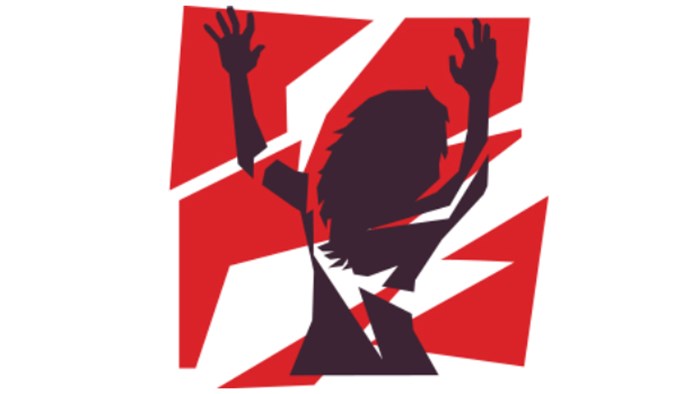 A survey of 192 countries has demonstrated scientifically what many have long known anecdotally to be true: Christian women are more religious than Christian men.

The lesser known fact: those women bear the brunt of persecution in the 50 countries where it is hardest to be a Christian.

“Increasing numbers of women face a double blow today—violent attacks against them because of their Christian faith, and because they are women,” said Kate Ward, an organizer of an international conference that met last month to seek answers to the growing problem. The conference was sponsored by Release International, Open Doors, Christian Solidarity Worldwide, the International Institute for Religious Freedom, and the Religious Liberty Partnership. 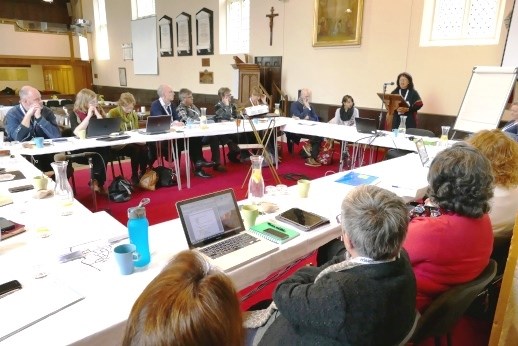 This Sunday, many American churches will observe “Stand with the Persecuted,” a day of activism sponsored by the Family Research Council, Open Doors, the Institute on Religion and Democracy, Voice of the Martyrs, In Defense of Christians, Christian Solidarity Worldwide–USA, International Christian Concern, and the 21st Century Wilberforce Initiative.

“While steps must be taken to stop future atrocities from occurring, provide aid to those whose lives have been upended, and to plan for their future, we must also recognize and nurture the solidarity that we as American Christians share with our brothers and sisters overseas,” wrote Ken Blackwell, former US ambassador to the UN Human Rights Commission, and Thomas Farr, director of the Religious Liberty Project at Georgetown University, in a joint op-ed.

“To advocate for them we must love them. And to love them we must know them,” wrote Blackwell and Farr. “Without this enriched relationship being developed over the long term, advocacy will languish. Just as importantly, we will miss the opportunity for spiritual participation in their suffering as members of the Body of Christ, and the joyful solidarity that results.” 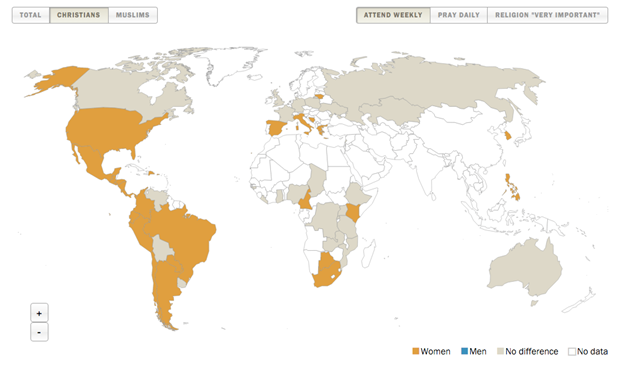 Women attend church weekly more than men in every country.

In general, women are more religious than men: 83.4 percent of women worldwide identify with a faith group, compared to 80 percent of men. That’s a difference of 97 million people, according to a recent survey by the Pew Research Center.

And about a third of the world’s women (33.7%) identify as Christian, larger than any other group.

Those women are more committed to their faith than the 29.9 percent of men who identify as Christian. According to Pew: 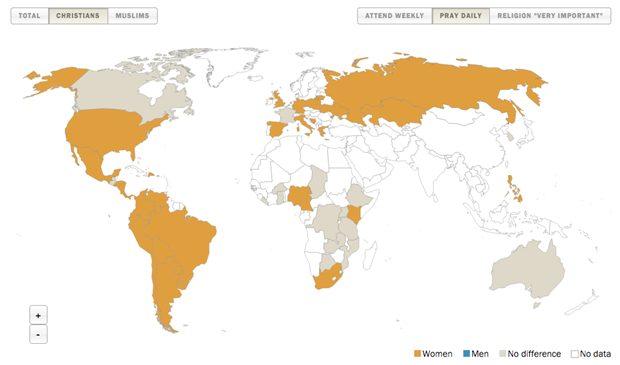 Women pray daily more than men in every country.

Islamist extremists are targeting those women as a deliberate strategy, according to Release. While Christian persecution has hit a modern high, females are especially vulnerable.

In majority-Muslim countries, Christian women are sometimes told how to dress, discriminated against, sexually harassed, forced into marriage, raped, kidnapped, and trafficked, according to Release. This is especially true in areas of conflict, such as Syria, the Central African Republic, and Nigeria.

Another justification is the payment of jizya, a tax that non-Muslim subjects were forced to pay to early Islamic rulers, according to World Watch Monitor.

In Pakistan, two Muslim men who raped Christian sisters were acquitted after a key witness refused to testify and a prosecutor didn’t show up in court. That wasn’t an anomaly—about 370 cases of forced conversion and marriage were reported in Pakistan in 2014.

That number is about average, according to a report from a Pakistani Muslim NGO. The abducted women, usually between the ages of 12 to 25, then endure “sexual violence, rape, forced prostitution, human trafficking and sale, or other domestic abuse." Prosecuting abductors in court is often counter-productive: sometimes the abductor’s friends claim she willfully converted, and sometimes the kidnapped women testify on behalf of their abductors out of fear of retribution.

In Syria, the attacks are part of a military strategy.

“Women are vulnerable due to biological jihad, in which ISIS and related groups are determined to impregnate infidel women to promote their cause, which is to make the whole world an Islamic State,” Release’s women program manager Emma Dipper told CT. “Rape is not just a weapon of persecution. It is at the root of their missiology and belief.”

Once violated, Christian women can face shame and ostracism from their own families and communities.

“We see this heartbreaking issue in the Central African Republic, Nigeria, and Iraq,” said Ward (whose name is an alias to protect her identity). “The rejection of their communities and their husbands extends the pain and suffering for women.”

The problem is enormous, she said.

“Churches, agencies, and voluntary organizations will have to work together at every level,’ said Ward. “We will have to find ways to cross cultural boundaries and challenge taboos. It will require the deepest levels of engagement and collaboration.”

CT often reports on persecution and women’s rights, including Open Doors’ annual World Watch List of the 50 countries where it’s hardest to be a Christian. CT covered the US State Department’s announcement that terrorists are now the greatest threat for the persecuted church, the move to officially label ISIS’ actions as genocide, and Canada’s new take on religious freedom.

CT also covered a million-dollar study that revealed how Christians in 30 different countries cope with persecution, as well as the way Egypt’s legal barriers seem to push Christian women to convert to Islam in order to obtain a divorce.

Christian Women Worldwide Are The Most Religious … and the Most Persecuted

Christian Women Worldwide Are The Most Religious … ...