The latest study from Barna also shows how many teens think the Bible offers hope, and whether their house rules are influenced by Scripture.
Sarah Eekhoff Zylstra|August 31, 2016 08:00 AM 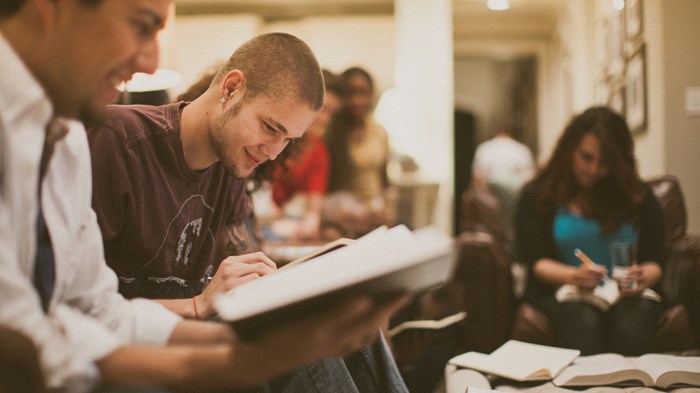 Most practicing Protestant teenagers—those who identify as Protestant, attend church at least once a month, and say their faith is very important in their lives—who read their Bible do so the same amount all year long (73%), much like all Bible-reading American teens (69%).

Those findings come from the second annual poll of how more than 1,000 teens ages 13 to 17 interact with the Bible, commissioned by the American Bible Society and conducted by the Barna Group in May.

Though there are fewer of them (16%, compared to 20% in 2015), practicing Protestant teens look a lot like they did last year. Slightly fewer said the Bible contains everything needed for a meaningful life (85%, down from 88%) and said they read their Bible every day (12%, down from 16%). A few more said they had read a liturgical text in the last week (14%, up from 10%).

The survey also asked brand-new questions, including whether teens saw their parents reading the Bible. Half of practicing Protestants (49%) said their parents read Scripture regularly; another 42 percent said sometimes.

Of the teens who read the Bible at least once a week, 90 percent say their parents regularly (55%) or sometimes (35%) read scripture.

Of practicing Protestant teens who reported their parents read Scripture, almost all said that the Bible influences the rules in their home quite a lot (80%) or somewhat (18%).

Half of practicing Protestant teens said the Bible is the inspired, inerrant Word of God, and a little more than 40 percent said it was the literal Word of God, just like in 2015. Half also said their personal use of the Bible has stayed the same, and another 40 percent said it went up in the past year; the same was reported in 2015. The biggest reason for the reported increase: an understanding that it was an important part of their faith journey (55%).

But the perception teens have of reading more doesn’t match the time they reported actually reading the Bible.

Fewer practicing Protestant teens reported reading their Bible on their own once a week or more (66%) than last year (74%), while more reported reading once a month or less (35%, up from 26%). 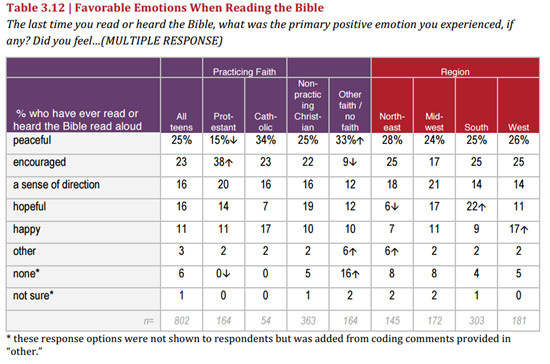 Practicing Protestant teens who read less this year said it was mainly because they were too busy (71%), a striking jump from those who reported being too busy in 2015 (51%). On the other hand, fewer teens this year reported being frustrated at their lack of time to read (18%) than last year (28%). Fewer also wished they read the Bible more (90%, down from 96%).

Those who read the Bible at least once a week reported that they’re thinking about what they read. Nearly all said they gave a lot of (42%) or some (55%) thought to how it might apply to their lives.

When they have questions, most practicing Protestant teens are asking their parents (39%) or a pastor or youth director (32%). Fewer ask friends (8%), teachers (5%), or an unrelated adult (3%) what they’re wondering about. 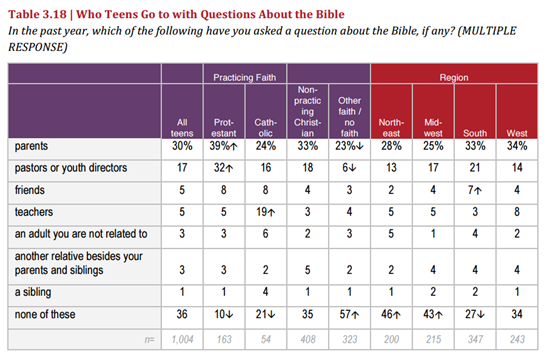 Fewer practicing Protestant teens (37%) than last year (41%) felt at least somewhat confident about their Bible knowledge, including just 4 percent who felt highly knowledgeable (compared to 10% in 2015). But most could identify Solomon as David’s son (71%) and Elizabeth as John the Baptist’s mother (63%).

Seven in 10 are following the presidential campaign, and nearly 8 in 10 said the Bible influences their opinion of the candidates (78%).

Half of practicing Protestant teens have watched a Bible-themed television show in the past year (51%); even more have seen a Christian movie (78%). Fewer have played a Bible board game (13%) or a Bible electronic game (7%).

For the first time, the survey asked whether teens found the Bible a source of hope. Virtually every practicing Protestant teen agreed; so did 77 percent of all teens, 47 percent of them strongly. 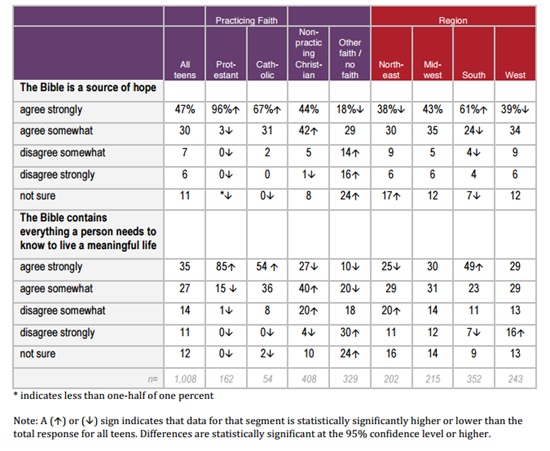