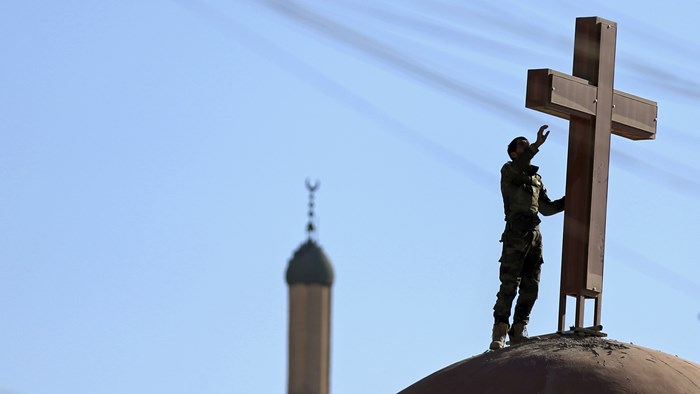 Image: Hadi Mizban / Associated Press
A cross is set on a church damaged by ISIS near Mosul, Iraq.

President Obama has approved legislation promoted by religious freedom advocates that should strengthen the United States’ effort to combat persecution of Christians and other faith minorities.

The House of Representatives approved the Frank R. Wolf International Religious Freedom Act (IRFA), H.R. 1150, on December 13 to complete congressional action on the proposal. That action came only three days after the Senate amended and passed an earlier House-approved version. Both the House and Senate endorsed the amended bill without opposition.

Bill supporters were optimistic that Obama would sign the measure, named in honor of Congress’ longtime top religious freedom advocate, into law. He did so on Friday.

H.R. 1150 serves as an update of the 1998 bill that established a religious freedom office in the State Department and an independent watchdog panel, the US Commission on International Religious Freedom (USCIRF). Wolf, the since-retired congressman from Virginia who championed global religious liberty, sponsored the original IRFA 18 years ago.

The new legislation is designed to improve the federal government's effectiveness in promoting religious liberty by, among other measures:

Russell Moore, president of the Ethics and Religious Liberty Commission, called the legislation "a vital step toward protecting conscience freedom for millions of the world's most vulnerable, most oppressed people."

"Millions, including many of our Christian brothers and sisters, have experienced the most brutal forms of persecution, and entire cultures are now on the brink of extinction," Moore said, in written comments for Baptist Press. "This is an urgent human rights crisis, and global religious liberty is too important to become a partisan wedge issue.”

The passage of the Frank R. Wolf International Religious Freedom Act shows a strong coalition working together for the cause of international religious freedom. The bipartisan nature of this passage shows us that religious freedom does not have to be a partisan issue but is rooted in our deepest commitments as Americans, and I hope that persecuted religious minorities around the globe will see that they have not been forgotten. While the passage of this act by no means solves the religious freedom crisis around the world, it is a step in the right direction.

Paul Coleman, deputy director of Alliance Defending Freedom (ADF) International, said the bill "demonstrates that the US is serious about the importance of religious freedom both for those who are suffering and for all those who love freedom in general."

"Those who are suffering around the world simply for holding to a certain faith shouldn't be forgotten, and those responsible for that persecution should be made to face appropriate consequences for their acts," Coleman said in a written statement.

Final passage of IRFA came in a week when IS claimed responsibility for a bombing at a Coptic Christian cathedral in Cairo, Egypt, that killed 24 people—even while violent religious persecution continued in such countries as Iraq, Nigeria and Syria. In Iraq, the Christian community has decreased by 80 percent in the last decade from 1.5 million to 300,000, the Wilberforce Initiative reported December 14.

Approval also came in a year when USCIRF reported that global religious liberty continued to decline. The commission cited the rampant imprisonment of prisoners of conscience, the startling increase in refugees, and the ongoing bigotry toward Jews and Muslims in Europe, as examples of attacks on religious adherents.

The State Department named its "countries of particular concern" (CPCs) in April, adding Tajikistan to a list that already consisted of Burma, China, Eritrea, Iran, North Korea, Saudi Arabia, Sudan, Turkmenistan and Uzbekistan. The CPC designation is reserved for governments that commit or tolerate "systematic, ongoing, and egregious violations of religious freedom."

In May, USCIRF—a bipartisan, nine-member panel appointed by the president and congressional leaders—urged the State Department to add the Central African Republic, Egypt, Iraq, Nigeria, Pakistan, Syria, and Vietnam to the CPC list.

Rep. Chris Smith, R-N.J., sponsor of the bill, said after its passage, "From China and Vietnam to Syria and Nigeria, we are witnessing a tragic, global crisis in religious persecution, violence and terrorism, with dire consequences for religious believers and for US national security.

"Ancient Christian communities in Iraq and Syria are on the verge of extinction and other religious minorities in the Middle East face a constant assault from the so-called Islamic State of Iraq and Syria."

Christians "are the most persecuted group on the planet," said Alexandra Tompson, legal analyst at ADF International, after a December 14 discussion at Vienna, Austria, sponsored by the Organization for Security and Cooperation in Europe. "Even in Europe, they often face intolerance and discrimination."

Sen. Bob Corker, R-Tenn., chairman of the Foreign Relations Committee, said the legislation "will help ensure that defending religious freedom remains at the core of our engagement in even the most repressive parts of the world and that we have the most effective policies in place to be successful."

The Southern Baptist Convention approved its latest resolution on international religious freedom in 2015, saying it encourages U.S. government officials "to elevate religious liberty concerns to the highest priority in foreign policy, invoking sanctions against those nations which advocate or tolerate persecution of those with differing religious beliefs."