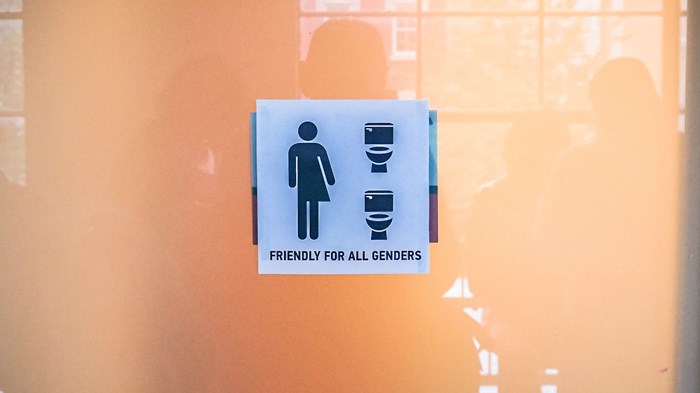 Is it morally permissible for a doctor to remove healthy organs? Is it acceptable to give puberty-delaying drugs to children who feel gender conflict? Is it ethical for society to require people to live as one gender if they identify strongly with the other?

Most Americans with evangelical beliefs would say no, according to the latest survey from LifeWay Research.

LifeWay asked 1,000 Americans whether they thought that changing one’s gender or identifying with a different gender is morally wrong. Respondents also had the option to select “it’s not a moral issue.”

Overall, more than half of Americans (54%) said it was wrong to switch genders by taking hormones or having surgery.

Evangelical believers are almost twice as likely (61%) as non-evangelicals (32%) to say using surgery or hormones to change birth gender is morally wrong. Compared to evangelicals, significantly fewer Catholics (29%), those of non-Christian faiths (41%), or the nonreligious (21%) believe it’s wrong to alter gender by medical means.

“A majority of Americans reject the view of a creator giving them a gender that shouldn’t be changed,” he said. “We freely change many things about ourselves—we have cosmetic surgery, we use teeth whitener, we dye our hair, we get tattoos. Many Americans view gender as one more thing on that list.” 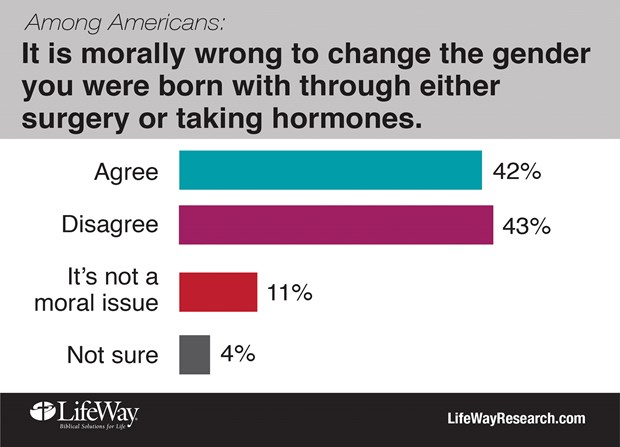 Americans are even less concerned about identifying with a different gender.

While more than half of evangelical believers (54%) said it’s wrong to identify with a different gender, just 35 percent of Americans share that view.

Only about a quarter of Catholics (26%), a third of those in non-Christian faiths such as Judaism or Islam (35%), and a fifth of the nonreligious (20%) say identifying with a different gender is wrong.

“Evangelical Christians are clearly in the minority on this issue,” McConnell said.

More than 1 in 10 Americans said identifying with a different gender isn’t a matter of morality at all (14%), and almost as many (11%) said it isn’t a moral issue to alter one’s gender through hormones or surgery. 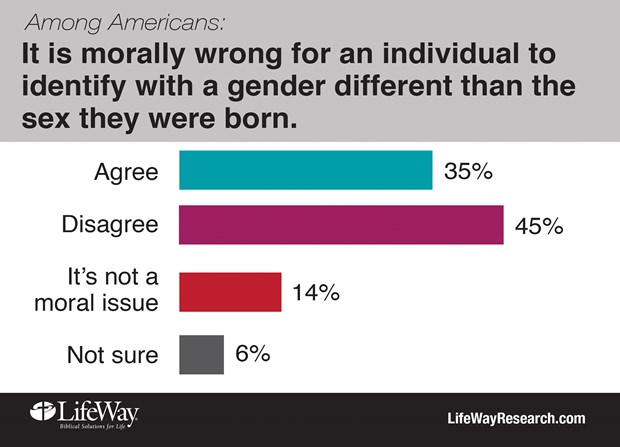 Those who personally know a transgendered person are much less likely to consider gender change morally wrong, according to the survey.

Those numbers drop by more than a third among the 27 percent of Americans who said they know a transgendered person. Only about a quarter of this group said changing gender by medical means (28%) or identifying with a different gender (25%) is wrong.

Acquaintances of transgendered people are also significantly more likely to believe changing gender through surgery or hormones isn’t a matter of morality. About one in six (16%) said such medical intervention is not a moral issue, almost twice as many as those who don’t know a transgendered person (9%).

Evangelicals are less likely than others to know a transgender person (20%) and more likely to have moral objections.

Young adults (18- to 24-year-olds) are most likely to report knowing a transgender person and less likely than others to consider gender change immoral. In that age group, 41 percent have a transgender acquaintance, and 31 percent said it’s wrong to alter gender through surgery or hormones.

More women than men say they know someone who is transgender (32% vs. 21%), but their beliefs about the morality of gender change are similar.

The phone survey of Americans was conducted Sept. 14-28, 2015. The calling used Random Digit Dialing. Fifty percent of completes were among landlines and 50 percent among cell phones. Maximum quotas and slight weights were used for gender, region, age, ethnicity, and education to more accurately reflect the population. The completed sample is 1,000 surveys. The sample provides 95 percent confidence that the sampling error does not exceed plus or minus 3.6 percent. Margins of error are higher in sub-groups.